Dalian iron ore futures on 26 Jul’21 picked up by 1.1% d-o-d with improvement in Chinese steel margins. Steel futures remained supported by positive sentiments, moving up by 0.2% as against the last trading session on 23 Jul. Closing prices of the most-traded ferrous futures contracts are:

However, a few trade participants are expecting the conversion spread to stabilize at INR 11,500/t in the near term from the current levels of INR 11,500-11,800/t.

Today, 10 sets of trades, indicative prices/bids/offers were recorded in the publishing window.

Why this index? India’s National Steel Recycling policy mentioned that the efficient use of scrap for steel production becomes very crucial for India as 35-40% share has been envisaged from scrap-based steel production in the journey of 300 mn t pa by 2030. This shall increase the requirement of steel scrap sharply from the present level of around 30 mn t.

To provide feedback on this index or if you would like to contribute by becoming a data partner, please contact – info@steelmint.com.

The aggregate crude steel production of 64 countries stood at 167.90 million tonnes (mn t) in June’21, as per data released by the World Steel Association (worldsteel).

The output volume increased by 11.6% against 150.45 mn t a year ago. Recovery in most of the global economies in CY’21 and the global spread of Covid-19 during Mar-June’20 with stringent lockdowns is relatable to this increase.

1. China’s crude steel output up 6.6%: China’s steel output stood at 93.90 mn t in June’21, up by a mere 1.5% against 92.51 mn t in the corresponding period last year (CPLY). There were several factors that restrained growth in China’s steel production. 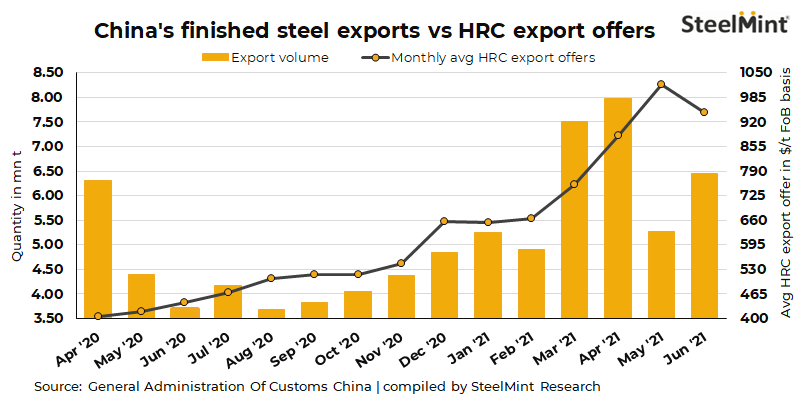 The country continued to battle the fierce second wave of Covid with sporadic lockdowns and limited hours of market activities since new cases picked up pace in early Mar’21. However, increased speed of vaccinating citizens in the country led to a gradual opening up of the markets by June.

The production volumes had slumped last year owing to stringent lockdowns across the country and the labour exodus. However, the company raised its capacity utilisation rate in CY’21 due to improved downstream demand with a gradual return of labour this year.

b) Steep hike in export offers on the year: Higher demand along with higher realisations in the overseas markets, especially the UAE, Vietnam and Europe, led to a steep hike in Indian HRC export offers.

SteelMint’s Indian HRC FoB export offers spiked to $989/t FoB east-coast basis in June’21 contrasted against $435/t FoB in the same period last year. However, these have come down from the highs of $1,027/t FoB in May’21. 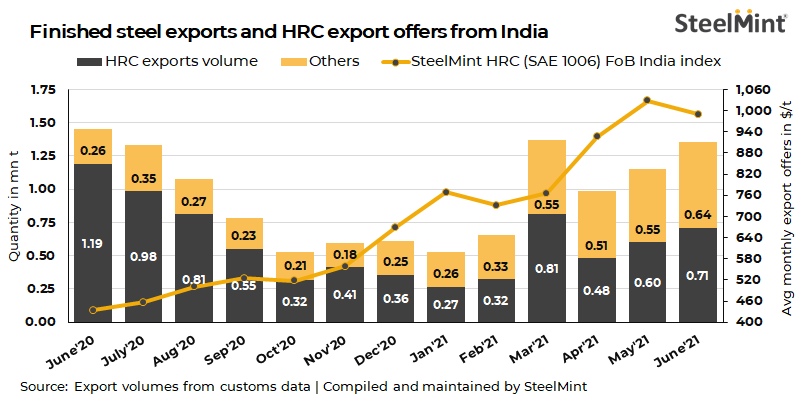 The country has been on a recovery track with manufacturing activities picking up with the easing of Covid concerns although some restrictions are still there.

Meanwhile, infrastructure and other construction activities linked to Tokyo Olympic preparations were expedited which boosted demand a bit during the term.

Outlook
Steel production across the globe shall see a shift as the world’s largest producer, China, is cutting down on capacities to meet the carbon neutrality status by 2060. But other nations are looking to add more capacities. The Indian steel industry is working towards expansion with steel demand forecasted to improve in the coming years.

Thus, it would be interesting to see how much of a difference this shift will bring in the overall steel production volume in the near future.

Sources from a Karnataka-based primary mill have reported that offers for granulated pig iron (GPI) are at INR 37,250/t exw. The plant has recently started offering GPI in the merchant market and is heard to be supplying to Maharashtra- and Gujarat-based plants. Meanwhile, steel grade pig iron offers through traders have been reported at INR 40,000-40,200/t FoR Hyderabad. Domestic pig iron prices are going strong due to limited supply by state-run plants at a time of robust demand from domestic and global buyers.

The world’s cumulative iron ore and pellet export shipments for Jun’21 were recorded at 132.8 mn t, registering an increase of 5% m-o-m as compared to 127 mn t in May, according to data maintained with SteelMint.

Vietnam’s coal imports are likely to decline in Jul’21 as COVID-19 cases in the country have grown at a fast pace since 7 July. While various provinces in the country are already under lockdown, the Vietnamese government has suspended some industrial activities too. Data from the country’s state-owned electricity company, EVN, show that the lockdown in July so far has led to a 15% drop on week in Vietnam’s average daily power generation in the third week of the month. The decrease is bound to weigh on coal consumption and imports from Vietnam.

Vietnam’s coal imports are likely to decline in Jul’21 as COVID-19 cases in the country have grown at a fast pace since 7 Jul. While various provinces in the country are already under lockdown, the Vietnamese government has suspended some industrial activities too. Data from the country’s state-owned electricity company, EVN, show that the lockdown in July so far has led to a 15% drop on week in Vietnam’s average daily power generation in the third week of the month. The decrease is bound to weigh on coal consumption and imports from Vietnam.