The Indian secondary steel market witnessed mixed trends on 27 Jul’21 even as prices fluctuated in the range of INR 100-400/t d-o-d.

Reference prices as on 27th Jul’21 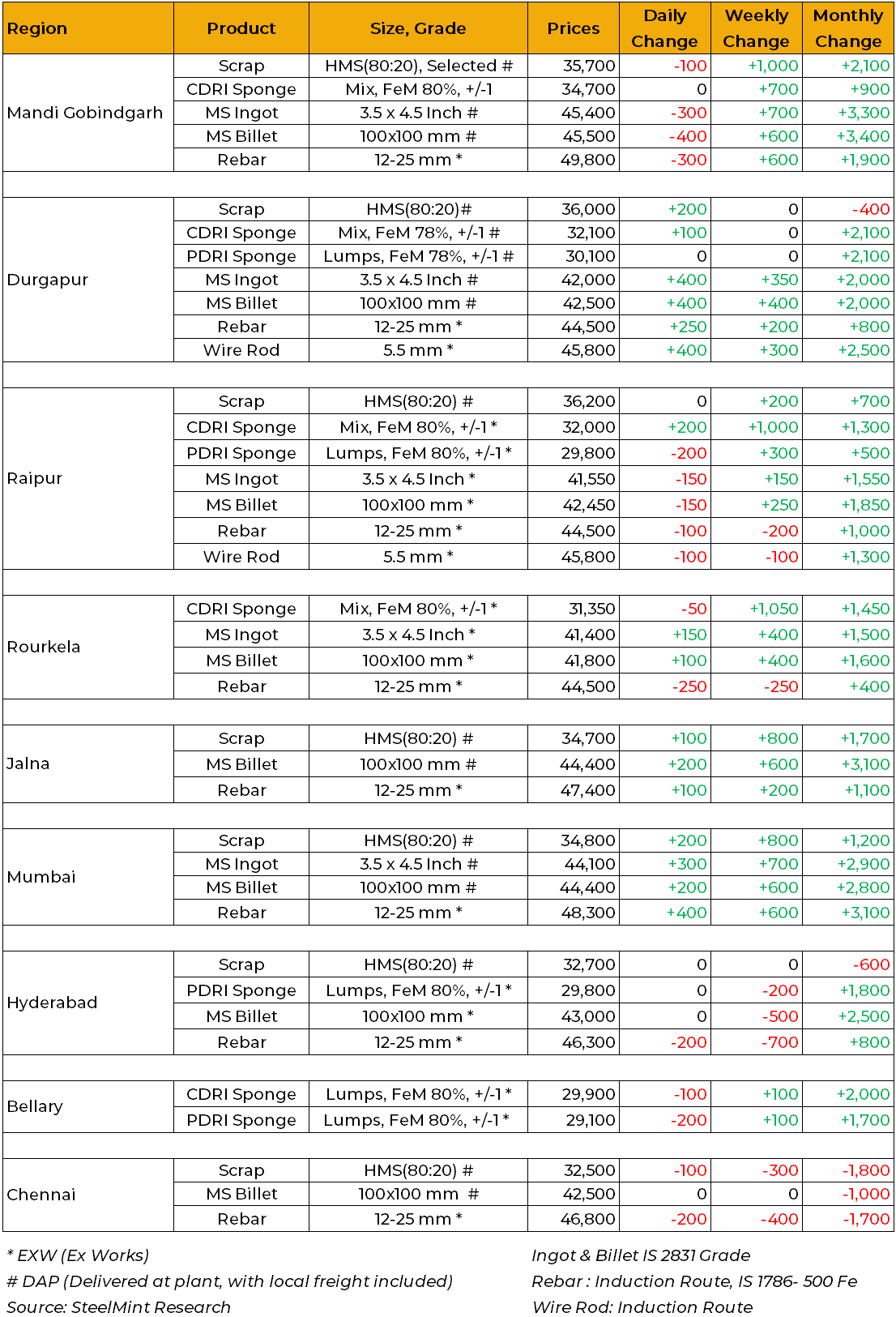 The index dropped slightly due to falling prices in Punjab, north India. However, sources are expecting billet prices to remain supported as there is no selling pressure on the part of producers, although supply of ready-delivery material remains tight. 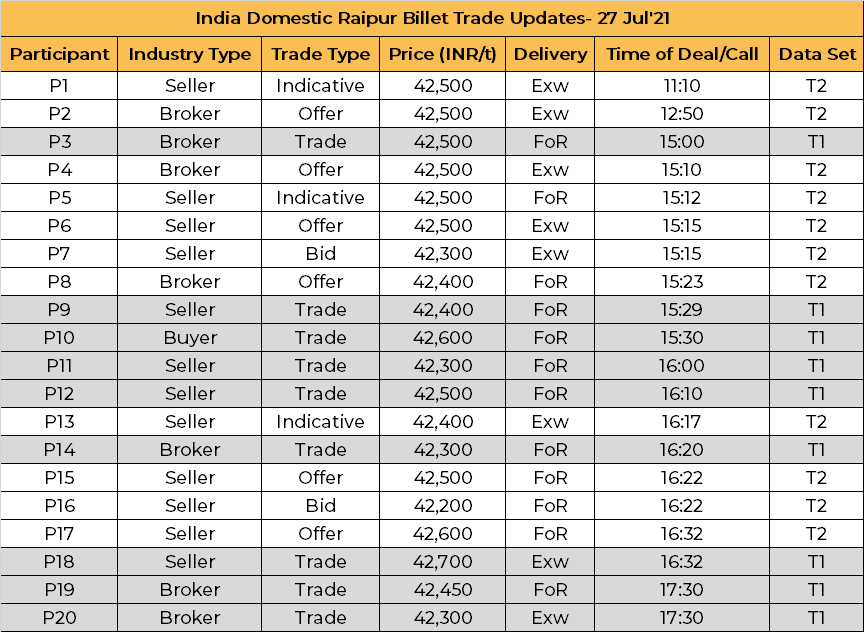 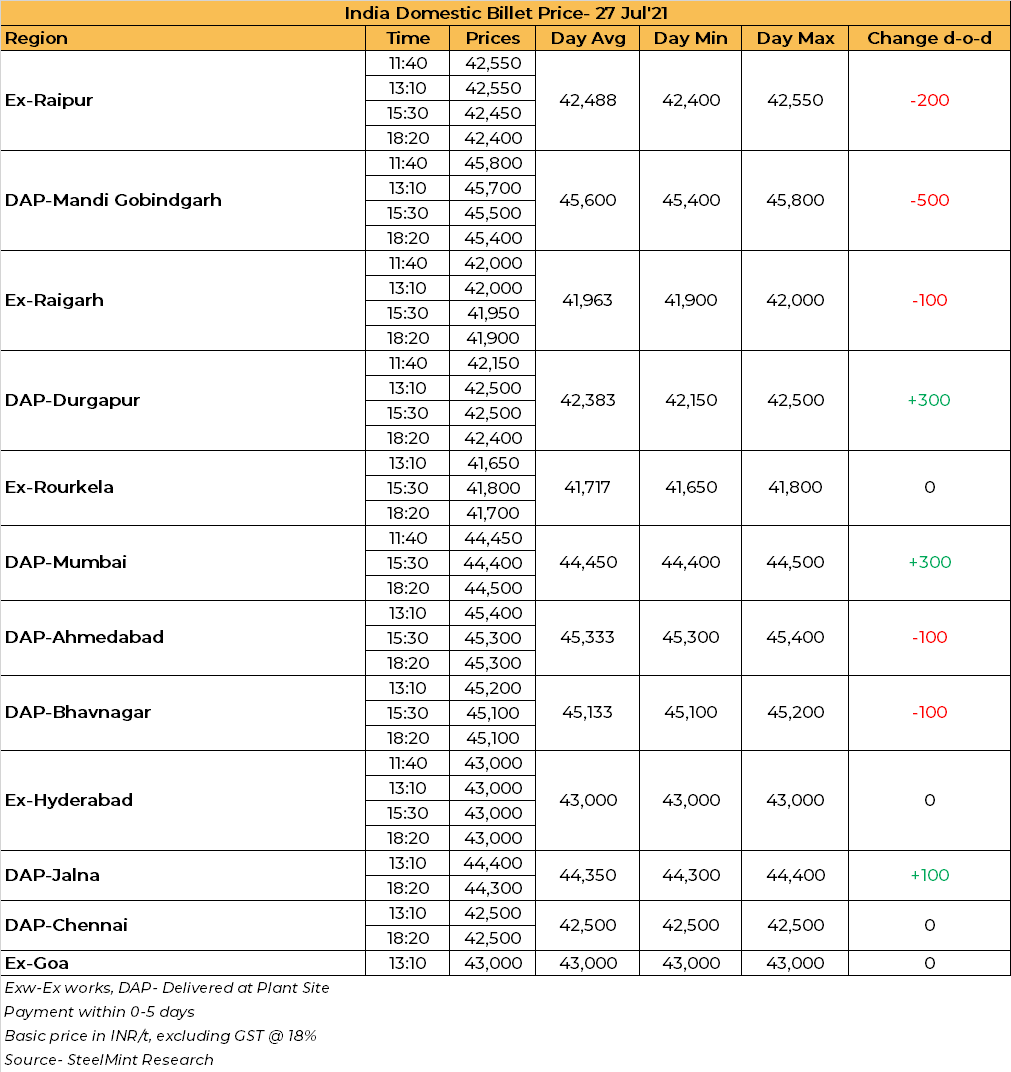 Spot trading in the Indian secondary steel market remained active on 26 Jul’21 with prices increasing by up to INR 600/t ($8) d-o-d.

As per SteelMint assessment, sponge iron prices surged by INR 100-500/t in major markets, with a sharp hike of INR 500/t in Raigarh’s sponge iron market. Also, domestic billet offers moved up by INR 100-600/t across the country. However, a major hike was witnessed in Mumbai (Maharashtra).

In addition, the induction furnace rebar market recorded positive trends as prices increased by INR 100-300/t in many regions, while price correction of INR 100/t was seen in the central and southern parts of India.

Reference prices as on 26th Jul’21 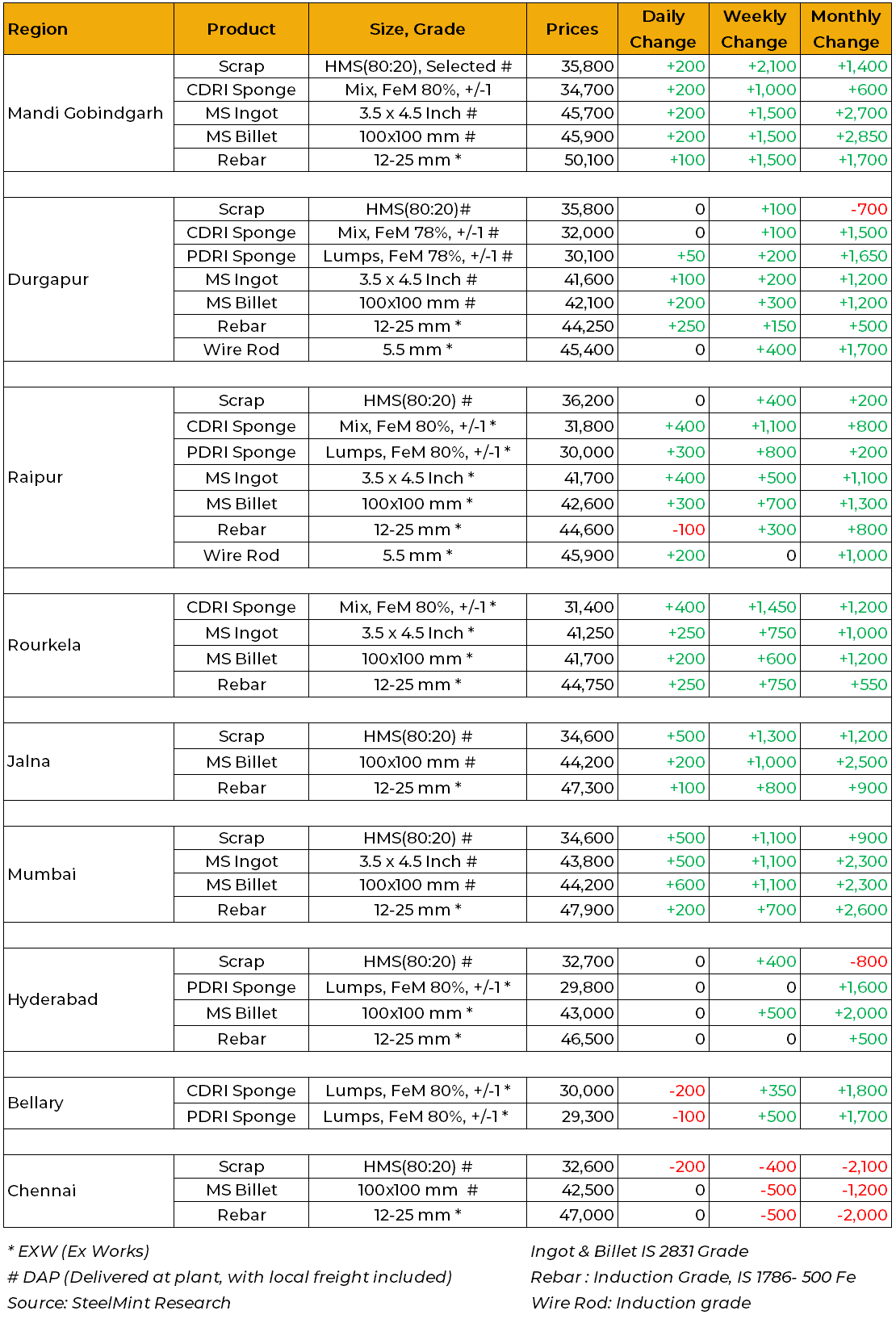 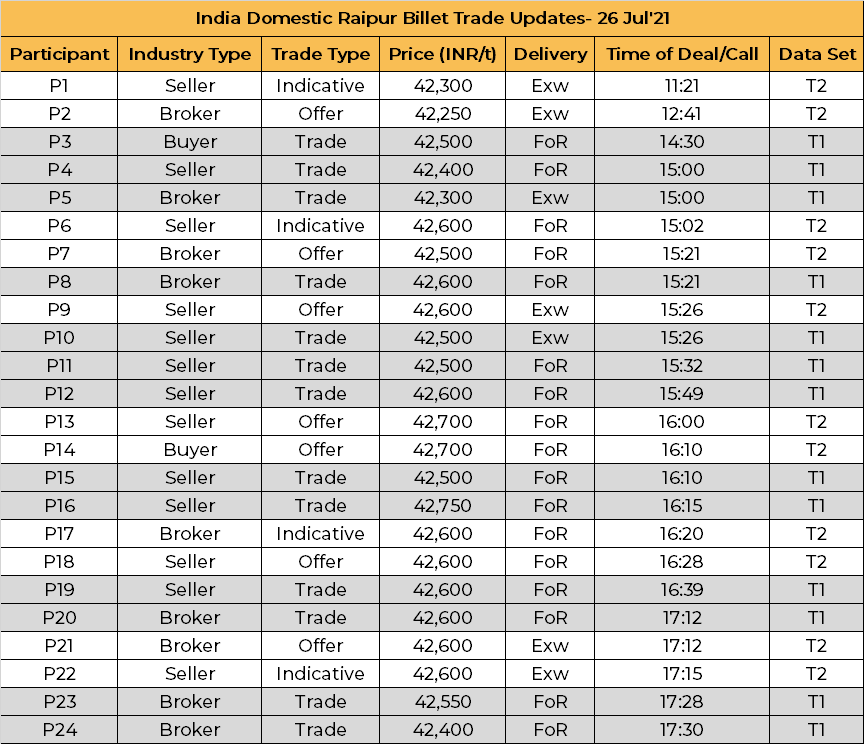 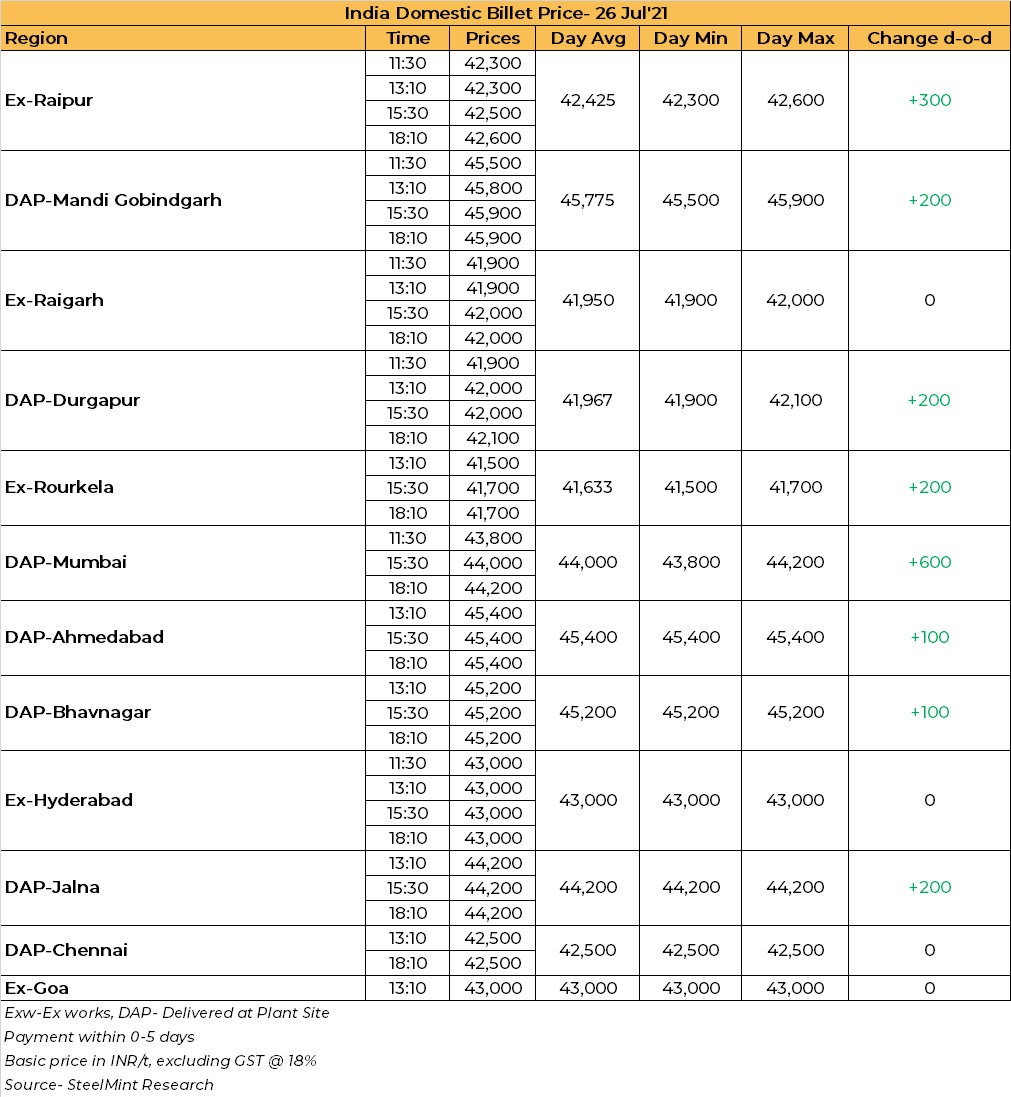 A Russian mill reported bookings of around 24,000 t of steel billets for China, SteelMint learnt from sources. The deal was concluded at $705-712/t CFR China and the shipment is likely to be scheduled for Sep’21. Russia exported 6 mn t of billets during Jan-May’21, with the key markets being Taiwan, Belgium and Mexico.

However, the index moved up on active trading subsequently along with prevailing supply crunch in the spot market due to closed furnaces in Raigarh. Rising prices in the northern region, the Punjab market in particular, was a major factor behind the price rally.

The index remained supported, as producers associated with the Mini Steel Plant Association in Raipur, set prices higher even though buying remained weak. The subdued IF rebar market poured cold water on prices, as deals were reported mainly from plants based outside Raipur, such as Raigarh. Resellers were also active in that bear market.

Towards the end of Jun, SteelMint’s billet index hit rock bottom on weak buying sentiments. Prices were recorded at INR 40,600/t on 29 Jun. However, prices are on the rise with recovering sentiments in the IF rebar market through into Jul’21.

SteelMint’s daily billet index records transactions and offers by both Raipur-based players as well as billet producers from other key markets such as Odisha, Punjab, Maharashtra, Gujarat and Hyderabad. It provides a precise and mathematically accurate assessment for traders through rigorous deal-by-deal monitoring of billet price movements.

Indian semi-finished steel market remains supported as prices gain further by up to INR 2,000/t, w-o-w. In the first half during the week good demand was noticed in the spot market, while trades were dull later on.

India’s induction furnace rebar market, in this week witnessed an upward trend and in most of the major markets rebar steel prices increased by INR 300-1,400/t w-o-w, except in Chennai market of southern region, SteelMint assessment shows.

In addition, Domestic HRC prices continued to remain under pressure due to bearish market sentiments and sluggish sales. The prices for HRC 2.5 mm remained unchanged at INR 64,000-65,000/tonne (t) exy-Mumbai for the second consecutive week, as per SteelMint’s assessment.

The Indian semi-finished steel market remained supported as prices gained further by up to INR 2,000/t, w-o-w. Demand was subdued during the week as, at the beginning of the week, there was good demand in the spot market, while, in the later days, trade was dull.

India’s finish long steel manufactured via the induction furnace(IF) route, this week, witnessed an upward trend in terms of prices. In most of the major markets, rebar steel prices increased by INR 300-1,400/t w-o-w, except in Chennai in the southern region, SteelMint assessment shows.

At the beginning of this week, improved demand and appropriate transactions for rebar steel in the spot market supported the manufacturers to keep prices high. However, limited buying interest and slow trade observed from middle of the week, owing to heavy rainfall in many cities and volatile semi-finished steel prices lowered trade activities which pushed the sellers to slightly adjust prices as per requirements of the market.

SteelMint’s prices for the benchmark 2.5 mm hot-rolled coils (HRC) remained unchanged at INR 64,000-65,000/tonne (t) exy-Mumbai for the second consecutive week. The prices mentioned above are exclusive of GST @18%.However, prices in the other key markets of Chennai and Faridabad saw a decline over the previous week. 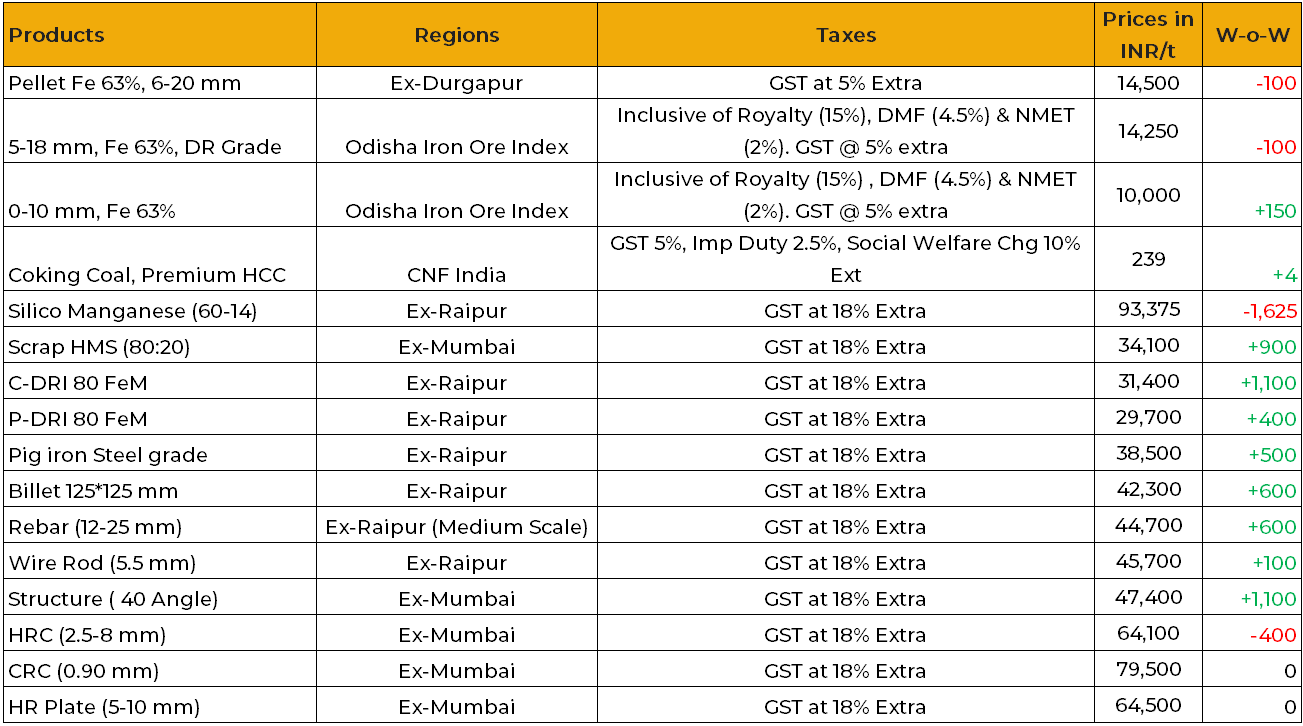 About 3,600 t of transactions in steel billets were recorded by SteelMint today as against 3,520 t on 23 Jul.

The index rebounded on renewed buying in the spot market and sellers’ preference for not dealing at lower offers. Hence, buyers resumed purchases with expectations that prices wouldn’t decline further. 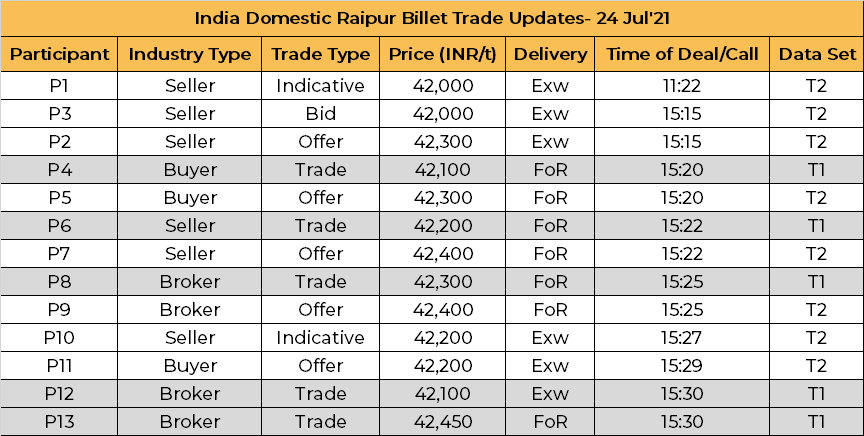 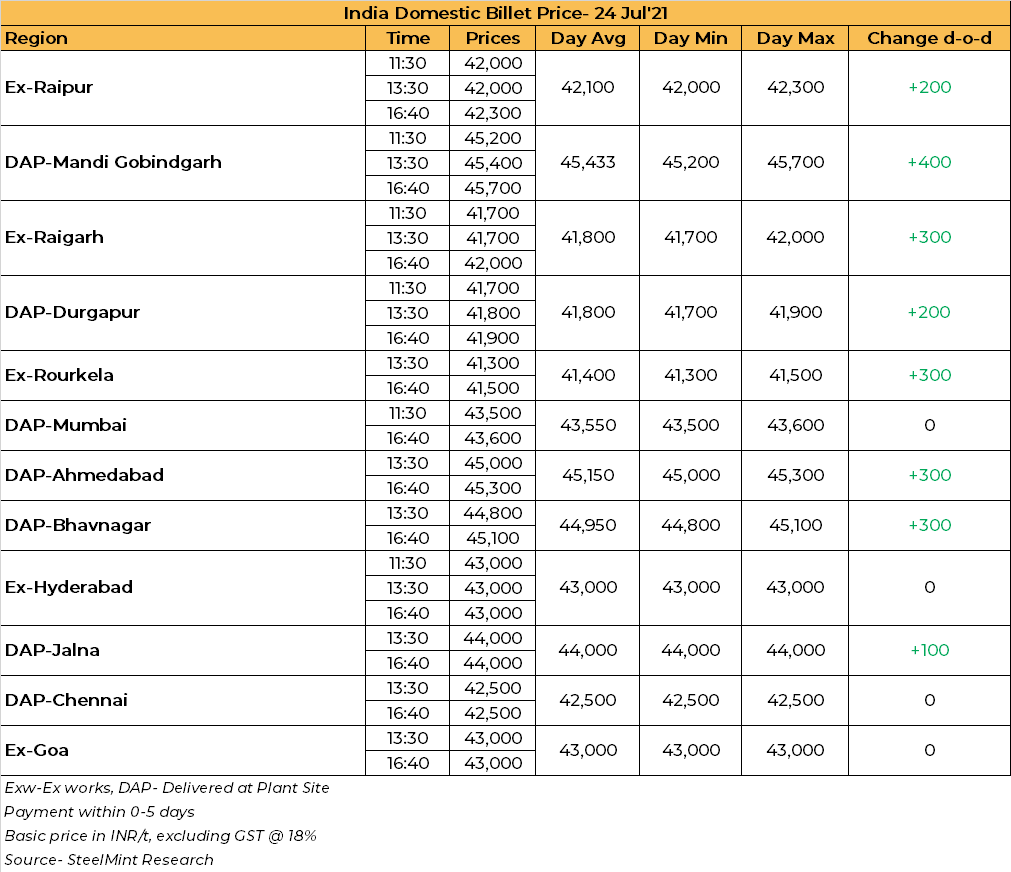