Negotiations for auto contracts for the second quarter (Q2) of Jul-Sept’21 have begun. And, perhaps, the steel mills and auto original equipment manufacturers (OEMs) are bracing for another round of controversy-laced interactions. The mills have made fresh price proposals which are over and above those at which Q1 deals were closed.

The Q2 contracts are on a quarterly basis, indicating that mills are preferring to move away from half yearly agreements.

When asked to comment on the Q2 auto contracts, Ranjan Dhar, Chief Marketing Officer, AM/NS India, told SteelMint: “Auto prices are not based on perception but actual movement of the index. We will settle based on the index only.”

Asked if the hikes are steep, Dhar replied, “Steep or not steep is always basis a reference. See the global steel prices and see the entire raw material basket. With reference to these, prices are still at a discount.”

Do auto OEMs support these hikes?

An official with a leading OEM corroborated that Q2 contracts are being negotiated but stated that the price proposals from the mills “is not justified”.

An official with another major vehicle manufacturer said the auto industry operates on a very thin margin of 4-5% and is not in a position to absorb the hikes or pass on to customers. “We need to keep some stability in vehicle prices or else brands will lose their credibility,” the official said.

About 60-70% of any vehicle is steel in the form of casting, forging, flat steel etc.

Another OEM official reasoned that mills are seeing a correction in trade prices on the back of tepid demand and thus are looking to make up in the long-term contracts. 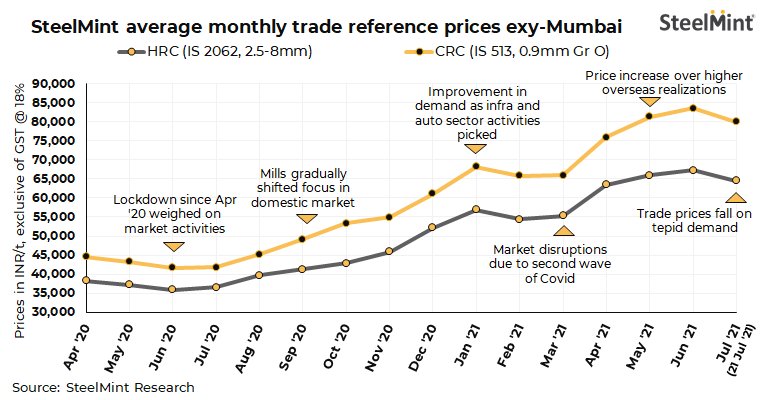 The auto contracts for Q1 (Apr-Jun’21) were closed last month, after much negotiation. In Q1, a primary mill and a leading auto manufacturer sealed the flats deals at INR 9,500/t for CRCs and INR 7,500/t for HRCs. Deals for longs were closed between the same two parties at INR 5,950/t.

As per a recent SIAM report, automobile production, domestic sales and exports in FY’21 over FY’20 were down 14%, 13% and 13% respectively.

Snapshot of Past Contracts –

Many said auto sales may come down since few consumers would want to buy at elevated prices. On the other hand, the Q1 contract hikes will reflect in mills’ Q2 balance sheets. 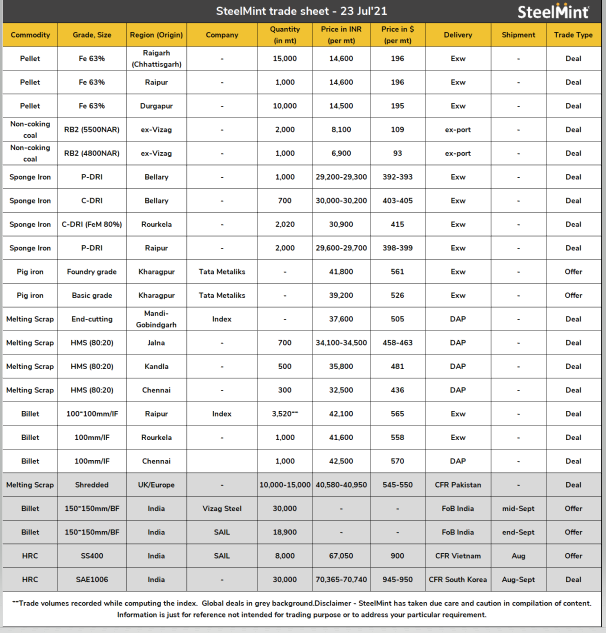 The Indian Steel Association (ISA) has proposed to the Ministry of Steel an “immediate” enforcement of the Tinplate (IS-1993) and Tin-Free Steel (IS-12591) quality control order (QCO).

Tin-mill steel must qualify as a priority product requiring mandatory QCO certification given its critical applications in areas such as a food/oil packaging, paint/aerosols, battery jackets etc, the ISA said. Around 70-75% of tin-mill steel is used for food packaging. Despite being among the 145 of 193 steel products included in the QCO, tin-mill steel standards are still awaiting enforcement, the ISA said.

India has been a dumping ground for more than 1.5 million tonnes of non-prime tin-mill steel over the last decade, leading to closures of production facilities of reputed public and private manufacturers – which are major deterrents for investments, the ISA said. Imports of non-prime tin-mill steel dumped into India is as high as 160%. Thus, domestic tin-mill producers are being unable to sustain their operations.

“The unwarranted imports and non-enforcement of the mandatory quality control order will hamper future investments which are likely to come under the PLI Scheme for the said product, as such defeating the government initiatives be it Atmanirbhar Bharat or PLI Scheme,” the ISA wrote.

The ISA has been repeatedly requesting enforcement of the Tinplate Quality Control Order (QCO) for the last two years ever since it was introduced for comments on the WTO website. The last request in this regards was submitted to the ministry 29 Jun’21.

The ISA said the QCO does not prohibit imports of steel products but is only a mandatory procedure to allow quality/standard steel products to be imported and used within the country post-attaining the respective licenses from the Bureau of Indian Standards.

Developed economies have identified India as one of the major dumping destinations for their defective steel, exploiting and managing the loopholes in the respective product standards, at the cost of safety and health of Indian consumers. “More than 70% of total imports of tin-mill steel are misprints, seconds, defective and waste/waste category. Such non-prime imports are priced 50% lower than prime tin-mill steel,” the ISA said.

The domestic tin-mill steel capacity is at 0.74 million tonne (mn t) which, the ISA says, is more than enough to meet the country’s demand of nearly 0.6 mn t in FY’22. An additional 0.29 mn t of fresh capacity is being added in FY’22, taking the total installed capacity for tin mill products to over 1 mn t – adequate to provide for the estimated annual growth of 6% over the next 5 to 7 years.

But, despite the growing domestic market, capacity utilisation of the Indian tin-mills has been limited to barely 70%. This has been possible by even exporting 15-20% of domestic production.

Meanwhile, the Metal Container Manufacturer Association recently met the Union steel minister to highlighted that the three-month extension of the BIS QCO is not helping the industry and wants it to be extended till Mar’22.

It may be recalled, on 17 July’20, the government had imposed a BIS standard on imports of tinplate/tin-free steel/products. Implementation of the same was extended up to 17 July’21.

POSCO’s India arm in Maharashtra posted an increase of 2.6% in steel sales to 349,000 t in Q2 CY’21 compared to 340,000 t in the first quarter. Profits rose as sales prices edged up due to pricing negotiation with major automakers. POSCO Maharashtra’s operating profit in Q2 CY’21 increased to $62 million.

Thus, overall, CRC exports uptrended in the entire H1 this year compared to H1CY’20 despite the fact that last year, April onwards, mills had fallen back on exports to stay afloat. Last year’s flats exports were mainly spearheaded by HRCs.

Europe keeps the tempo up

The main reason for the uptrend was the frenzied exports to Europe, especially in the Apr-Jun quarter. SteelMint’s data reveals that actual exports to the European Union in Jan-Mar’21 were down by 27% to 0.11 mn t compared to the quota quantity of 0.15 mn t. However, in the Apr-Jun’21 quarter, Indian mills exceeded the quota of 0.15 mn t by 8% to 0.16 mn t.

“CRC exports went up in H1 because demand for automobiles went up by around 75% in May in the EU,” corroborated a source.

CRC prices not under pressure

Interestingly, the firm export demand was a key reason for the widening spread between CRC and HRC prices. Mills have been mostly revising HRC list prices against the backdrop of subdued domestic demand in Apr-Jun, leaving CRC prices untouched, assured of high overseas demand, especially from Europe.

Consequently, the domestic price spread had also widened to a record INR 16,500/t in mid-Jun’21. “Mills had refrained from revising downward their CRC prices because overseas demand was firm. They were not under any pressure with regard to CRCs,” added the source.

With Indian mills having exhausted their entire CY’21’s flat steel export quota for Europe in the first five months of the year itself, there is limited scope for CRC exports in H2. Vietnam, despite being a lucrative flat steel export market, is mainly focused on HRCs.

Automobile sales in China fell by 12.4% m-o-m to 2.01 million units in Jun’21 as compared with 2.30 mn t in Jun’20, according to latest figures released by the China Association of Automobile Manufacturers (CAAM). Global shortages of semiconductors (processor chips) have hit auto production and sales in the world’s leading car market. China’s auto sales in the first half of CY’21 increased by 25.6% y-o-y to 12.89 million units.

Auto manufacturers began FY ’22 with expectations of month-on-month sequential recovery. But their hopes were dashed by the catastrophic second wave of the pandemic and the phased lockdowns from mid-April till the better part of May.

Thus, June can be seen as the first month of this fiscal to have sustained plant operations in many areas of the country, compensating for the volumes lost in April and May.

Auto makers have recovered significant ground as the dispatches have normalised with the entire production process back to previous levels.

Maruti Suzuki recorded the highest gain in market share of 16.8% in Jun ’21 compared to May ’21. Maruti’s domestic volumes shot 277% in Jun ’21 when compared to May ’21.”Sales in Q1 of both FY ’21 and FY ’22 have been far from normal owing to the Covid-related lockdowns and disruptions and hence any comparison would not be meaningful,” MSIL said in a regulatory filing.

Tata Motors continues to perform well and its volumes more than doubled in Jun ’21 against Jun ’20. It is now averaging around 25,000 units and plans to increase this to 30,000 with the launch of the HBX mini-SUV.

Mahindra & Mahindra regained its fourth rank with and sales increasing by over 109% y-o-y and 114% m-o-m.

In the two-wheeler segment, market leader Hero MotoCorp sold more than 4 lakh units in the domestic market. “During this quarter, the auto industry witnessed significant disruptions triggered by the second wave of the coronavirus pandemic, restricting movement of logistics and dampening customer sentiments,” the company said in a statement.

“Heading into the upcoming festive season, the company remains cautiously optimistic about customer demand in the coming months. The expected surge in personal mobility, forecast of a normal monsoon in several parts of the country and the improving rural sentiment are expected to lead to a swift revival in sales,” the company further said.

Rival Honda Motorcycle and Scooter India (HMSI)sold more than 2.12 lakh vehicles in the domestic market. “Almost 95% of HMSI dealers have resumed business while we are gradually scaling up operations across all four plants,” said Yadvinder Singh Guleria, director, sales and marketing, HMSI. “Overall, the two-wheeler sales performance in Jun ’21 has boosted market sentiment as more customers are visiting dealerships and enquiring online,” he added.

Escorts said that the on-ground situation eased in June as the second wave of the pandemic started diluting. “Our inventory levels, both with the company and with the channel, continue to be at normal levels. We remain optimistic for the rest of the fiscal year, as timely and expected above-normal monsoon, increase in the minimum support prices, and record direct procurement by the government are leading to a positive build-up of farmer sentiments,” the company said.It sold 11,956 units in Jun ’21, clocking a growth of 12.5% y-o-y.

Going forward, most of the OEMs are increasing prices due to the spike in input costs. Global semiconductor shortage, rising costs of steel, fear of the Covid third wave, sharp increase in fuel prices and the rise in ownership cost are also being seen as some of the challenges that auto majors face.

Scientists at the department of metallurgical engineering at the Indian Institute of Technology (Banaras Hindu University) have been successful in their attempts at producing nickel-free surgical grade stainless steel, as per latest reports. The metal is much cheaper and safer than stainless steel containing nickel, which is a harmful element that could get dissolved in the human body. The lightweight metal is ideal for use in production of stents, pacemakers and valves, scientists informed.