MSTC-Karnataka conducted a manganese ore auction on behalf of Sandur Mines on 20 Jul’21, as per reports. About 16,632 t of different grades of ore was booked by 10 participants at a price 7.58% higher than the set base price at the auction. Sandur had increased the base price by 12% for Mn 30-32% grade material compared with the previous auction on 25 Jun. The reasons behind the price hike were:

The fate of the ferro alloy industry is intrinsically linked to that of the steel industry. In CY’20, the first wave of Covid and strict lockdown had reduced steel consumption to nil, which had also dragged down manganese alloys demand. There were also supply issues from South Africa which too was in the throes of Covid.

Secondly, demand from the export markets may also stay buoyant with the implementation of the Russian export tax which will create a case for the Russians to exit the export market from Aug’21. The markets vacated by Russia can be catered to by Indian smelters.

Thirdly, a possible export duty from China could further open up markets for India.

India is the largest and cheapest supplier of manganese alloys globally. 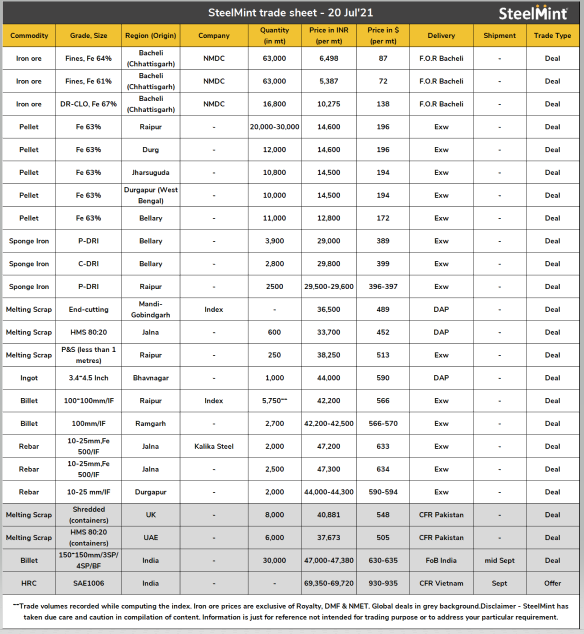 As per sources, Tshipi and South Africa-based UMK have both reduced semi-carbonate manganese ore offers for Mn 36.5% and Mn 36% respectively by $4.70/dmtu CNF China for Aug’21 shipments – down by $0.20/dmtu compared with July shipments. The reasons behind the reduction in prices are:

South Africa, the world’s largest producer of manganese ore, recorded production volumes of 15.79 mn t of the material in CY2020, down 2.95% y-o-y against 16.27 mn t in CY2019. South Africa has the largest manganese reserves in the world and accounts for nearly 33.5% of the total global manganese ore production.

According to customs data accessed by SteelMint, South African manganese ore exports declined to 1.597 mn t in May’21, down by 20.7% against 2.015 mn t in April. The decrease in exports is mainly due to reduced buying from China and South Korea. However, export volumes rose by 39.3% y-o-y in the Jan-May’21 period compared with the same period in 2020.

MSTC-Karnataka conducted an e-auction for 10,080 t of different grades of manganese ore (Mn 28-34%) on behalf of Sandur Mines (SMIORE) on 25 Jun’21. In all, 13 bidders participated in the auction, and the entire quantity was booked at 21.49% above the floor price. The base price for the auction for Mn30-32% material was 6.25% higher compared to the previous auction, given the rise in manganese alloys prices.

As per customs data, imports of manganese ore into China increased by 27% m-o-m to 28.54 mn t in May’21. Imports increased 25.2% y-o-y for the Jan-May’21 period. Increased prices along with firm demand for silicomanganese resulting from a hike in steel production have triggered imports of manganese ore. As per World Steel Association data, China produced 99.5 mn t of crude steel in May’21 up by 7% m-o-m.