Notably, due to the continuous hike in the number of Covid cases, Vietnam’s two major cities Hanoi and Ho Chi Minh are under strict lockdown, causing transportation and logistics hurdles. Currently, construction sites are closed and waiting for further instructions from local authorities, SteelMint learnt from a reliable market source. Domestic rebar offers are now at VND 15,900-16,000/Kg exw basis.

The Vietnam government has proposed an export duty of 5% on billets exports last week, intending to ease domestic steel prices. In the latest update received, the Vietnam Steel Association (VSA) has petitioned the government against the imposition of the export tax.

CoalMint’s vessel update reveals that, between 13-17 Jul’21, three thermal coal vessels with a combined quantity of 0.20 million tonnes (mn t) from China are set to arrive at Indian ports of Dahej, Bhavnagar and Ennore.

China is a net importer of thermal coal and is dealing with shortage due to increased power demand in hotter-than-usual summer season.

However, probing further, CoalMint learned from participants that the vessels arriving from China are Australian thermal coal cargoes that were stuck at the Chinese ports for a long time amidst the ban and have been subsequently bought by Indian buyers at reasonable rates.

However, at these levels, Indian cement manufactures who had been the key importers of Australian coal till May’21, are now shying away from making any major bookings.

More so, around 0.36 mn t of Australian thermal coal is arriving at Indian ports between 8-18 Jul’21 with the highest quantity of 0.22 mn t coming for Adani Enterprise while the remaining is being bought by the players from the power and steel sectors, CoalMint’s vessel line-up reveals.

In the ongoing scenario where coal demand from the north east Asian countries remains high, liquefied natural gas (LNG) prices have escalated and there are supply concerns in Indonesia and South Africa. Hence, any chances of price correction seem unlikely in the near term.

Malaysia-based OM Holdings Ltd has been granted approval by the Bintulu Division Disaster Management Committee to resume operations, as per latest reports. Operations have recommenced initially at four submerged arc furnaces, as part of a phased plan for ramping up production. The plant was operating at a rate of 12,000 t per month of ferro silicon and 18,000 t/month of silico manganese production before shutdown. It has 16 units in all of 25.5 MVA furnaces, of which 10 are earmarked for production of ferro silicon, while six units have been modified for the production of manganese alloys.

Vedanta (FACOR) conducted an auction today for 1,500 t of ferro chrome. The entire quantity on offer received bids, as per SteelMint reports. As most of the major producers don’t have much material to offer in the domestic market, the auction witnessed aggressive bidding. It fetched prices which stand at a level similar to those prevailing in the domestic market. Current prices for HC ferro chrome are at INR 104,000/t, ex-Jajpur.

Odisha’s Directorate of Mines has sought a clarification from the state government’s Department of Steel and Mines about the commencement of assessment to measure shortfall in mineral dispatches from the auctioned leases vis-a-vis the minimum dispatch requirement specified in the Mineral Concession Rule (MCR), 2016, SteelMint learnt from government sources.

The MCR, amended on 10 Jun’21, will come into effect from 1 Jul’21. The amended MCR stipulates that for mining leases that were executed on or before the commencement of the Mineral Concession (Third Amendment) Rule, 2021 the assessment of shortfall in dispatches shall apply after one year from the date of execution of mining lease or the date of commencement of the MCR (Third Amendment) 2021, whichever is later.

Out of 19 auctioned leases for which lease deeds were executed before the MCR (Third Amendment), 11 leases were executed during Jun’20 and are completing one year before 1Jul’21. These include four iron ore leases of JSW Steel as well as leases awarded to AM/NS India and merchant miner Serajuddin and Co. among others.

The Directorate has asked for clarification on whether the assessment of shortfall under rule 12(A) of MCR would be made on the date of completion of one year from the date of lease execution or the date of the commencement of the amended rule, which is 1 Jul’21.

Rule 12A (1A) of the MCR (Third Amendment) specifies that in case of any shortfall in dispatch in view of the minimum dispatch requirement, which shall be assessed on a quarterly basis, the lessee shall pay the amounts payable under rule 13 of the Mineral (Auction) Rules, 2015 for the actual dispatch.

In addition, the lessee has to pay the difference between the amount that would have been payable for the quantity that is stipulated as the minimum dispatch requirement in a particular quarter (on the basis of the weighted average of the grade of mineral dispatched during the quarter) and the amount paid on the basis of the actual dispatch in that quarter under rule 13 of the Mineral (Auction) Rules.

SteelMint earlier reported that Odisha’s Directorate of Mines is keeping tabs on the actual dispatch volumes from the auctioned leases. The state government has also sought compliance from the new lessees on critical issues pertaining to irregularities with stacking at the auctioned leaseholds. These issues surfaced after the regulatory authorities discovered that some new lessees were falling short of dispatching permitted volumes resulting in stockpiling of minerals and ore at mine sites. 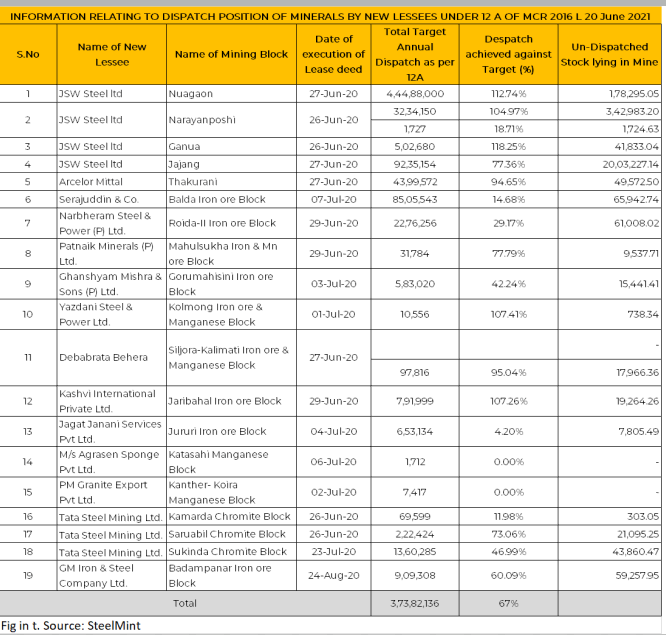 Bhutan’s ferro silicon producers increased their offers by INR 5,000/tonne (t) to INR 120,00/t last week. Soon after this, they got overbooked within a day and closed sales at these prices. However, a few producers are accepting orders for very small lots at higher levels. Most producers in Bhutan are reluctant to take bulk orders due to supply shortages. Some small deals were concluded from Bhutan at around INR 125,000/t this week, while the offers have been increased to up to INR $130,000/t.

Malaysia is the major ferro silicon market for Indian importers. However, with their largest ferro silicon producer, OM Holdings, suspending operations, supply is tight in the country. Guwahati is the only source for ready deliveries now. Due to the tight supply-demand dynamics, buyers and traders are shifting towards the Chinese market to procure the material. However, due to production cuts in the Ningxia region, Chinese offers increased to around $1,790/t for the grade 72% and $1,820/t for the grade 75%.

Indian producers are full with domestic orders and are not catering to exports currently. It is expected that prices in Bhutan would further increase in the coming week as enquiries remain on the higher side.

The Indian Energy Exchange (IEX) traded 6,540 MU of electricity volume in May ’21 recording a fall of 15% m-o-m compared with 7,707 MU in Apr, amidst continuation of Covid restrictions as well as cyclonic disturbances. Besides, surplus power availability in difficult market conditions negatively impacted prices in the day-ahead market which saw a steep fall of 24% on a monthly basis to INR 2.83/unit in May ’21.

India’s petroleum coke imports decreased sharply by 65.8% y-o-y to 0.41 mn t in May’21, CoalMint’s vessel lineup data shows. This is understood to have been primarily driven by reduced usage of high-priced pet coke and increased coal consumption in the fuel mix to manage production costs incurred by cement companies.

Taking a consumer-friendly initiative for the benefit of electricity consumers, the government has permitted state governments to transfer domestic coal linkages of one power station to another in order to induce cost reduction in power generation.

Under the provision, the linkage can only be transferred to those plants which have been established through a bidding process under the guidelines issued by the power ministry based on the net heat rate. The process requires ensuring that the concerned plant is more cost efficient and the power generated from such plants is supplied to the state itself.

The entire savings due to the flexible use of such linkages would be automatically passed on to the power distributing companies and ultimately to the consumers. Besides, this would help in reducing coal imports as well as in carbon emissions as the coal will be used in the more efficient power plants with lower station heat rate.

At present, consumers in Punjab, Haryana and Uttar Pradesh will benefit from this provision, with the expected savings in Punjab alone estimated to be around INR 300 crore annually, as per the power ministry.

Imports on the rise again on spurt in electricity demand

However, with a surge in power demand, imports have witnessed a steep rise of 25% y-o-y to 4.28 mn t in Apr ’21, as per the data provided by the Central Electricity Authority (CEA).

In order to attain its long-term goal, the government has taken a series of measures to supply coal to reduce dependence on imports.

First, Coal India Ltd (CIL) has decided to continue with the supply of coal to the power plants under the import substitution scheme in the ongoing fiscal whereby power utilities desirous of procuring domestic coal in lieu of imported coal have been asked to submit their requirements.

Additionally, the coal miner has extended the trigger level to 80% under the fuel supply agreement (FSA) route for power plants to encourage them to purchase higher volumes of domestic coal.