MOIL has increased prices for all grades of Manganese ore by 10% m-o-m for Sep’ 20, w.e.f 01 Sep’20. The increase in prices can be attributed to low ore production. Total quantity offered is 23,106t which is 29% lower than the previous month.

The mining major, South 32 has announced production cut at its Wolvekrans collieries in South Africa for three months starting 1 Sep’20.

The company has cited mounting operating losses and negative cash flows triggered by COVID-induced sluggish seaborne demand as the key reasons for the production cut.

The Wolvekrans is one of the largest open-cast coal mine having marketable reserves of 315 mn t of thermal coal. The mine supplies coal to power utility Eskom which would continue however, the production cut is meant only for export market.

The mine processes 6280 kcal/kg NAR thermal coal with VM and ash content of 25% and sulphur content of 0.48% for export market.

The company highlighted that its thermal coal export sales declined by 30% y-o-y at 2.18 mnt during Apr-Jun’20 quarter as a result of lower production volumes and the diversion of coal to domestic customers, as export shipments were affected by COVID-19 lockdown, impact to the logistics chain and, end-user demand.

How will this impact Indian market?

South 32 has an average export sale of 2.5 mn t in each quarter over last two years and the supply curb is likely to make the South African API coal index go up in the upcoming months.

India is one of the key markets for South African thermal coal attributing to around 50% of its total yearly exports. During Jan-Jul’20, the country exported a total of 41.6 mn t of thermal coal and exports to India stood at 19.4 mn t.

As per the industry participants, in case of India, the South African coal is majorly used by sponge iron sector and as sponge iron prices in domestic market is going up due to rising iron ore and pellet prices, the increased imported coal offers would further push the end-product prices despite overall tepid demand.

Japan- the world’s 3rd largest scrap exporter has registered a fall in its ferrous scrap exports by 19% to 0.7 mn t in Jul ‘20 as against 0.86 mn t in Jun ‘20, as per customs data maintained with SteelMint. Exports to South Korea have come down by 37% m-o-m. Higher prices and preference to Russian cargoes lowered bookings for Japanese scrap by Korean mills.

India is the largest exporter of silico manganese in the world, and almost 40% of its production is exported. However, with the recent appreciation of Indian currency, the export competitiveness of India dropped as the negotiation tolerances shrank. Meanwhile, the exporters are worried about the uncertainty over the benefits under MEIS (Merchandise Exports from India Scheme) validity.

One of the major exporters revealed to SteelMint that since the past week exports have dried up and thus the pressure to sell in the domestic market is increasing. Meanwhile, the domestic market is also affected by shrinking demand from the steelmakers. Currently, the offer prices are at around INR 61,000/t Ex-Raipur, however, deals are being concluded in the range of INR 60,500-61,000/t. Similarly in Durgapur also the quoting prices remain at INR 62,000/t, but deals have been concluded at INR 61,500/t.

Although, the producers in Raipur are waiting for MOIL to release their prices for Sep’ 20 but are not sure if it will have much impact on the silico manganese prices.

Producers are waiting for the exports market to pick up. Meanwhile, the prices remained stable in the market.

Outlook
The dull conditions in the silico manganese export market might not last long and in the coming weeks, there will likely be increased demand from the European countries.

Indian secondary steel market has seen a sharp hike in prices today. Sponge iron prices increased by INR 300-900/t in all the regions. Whereas billet prices surged by INR 50-1,000/t in major markets with a major hike of about INR 1,000/t in Raipur & Hyderabad. Following the trend, rebar prices also moved up by INR 200-900/t in all the locations.

Sources are expecting the steel prices to remain supportive as raw material prices remain tight & global scrap prices are also on the higher side. Also, the prevailing positive trends on an expected hike in prices by primary mills, have kept sentiments positive.

Reference prices as on 31st Aug’20 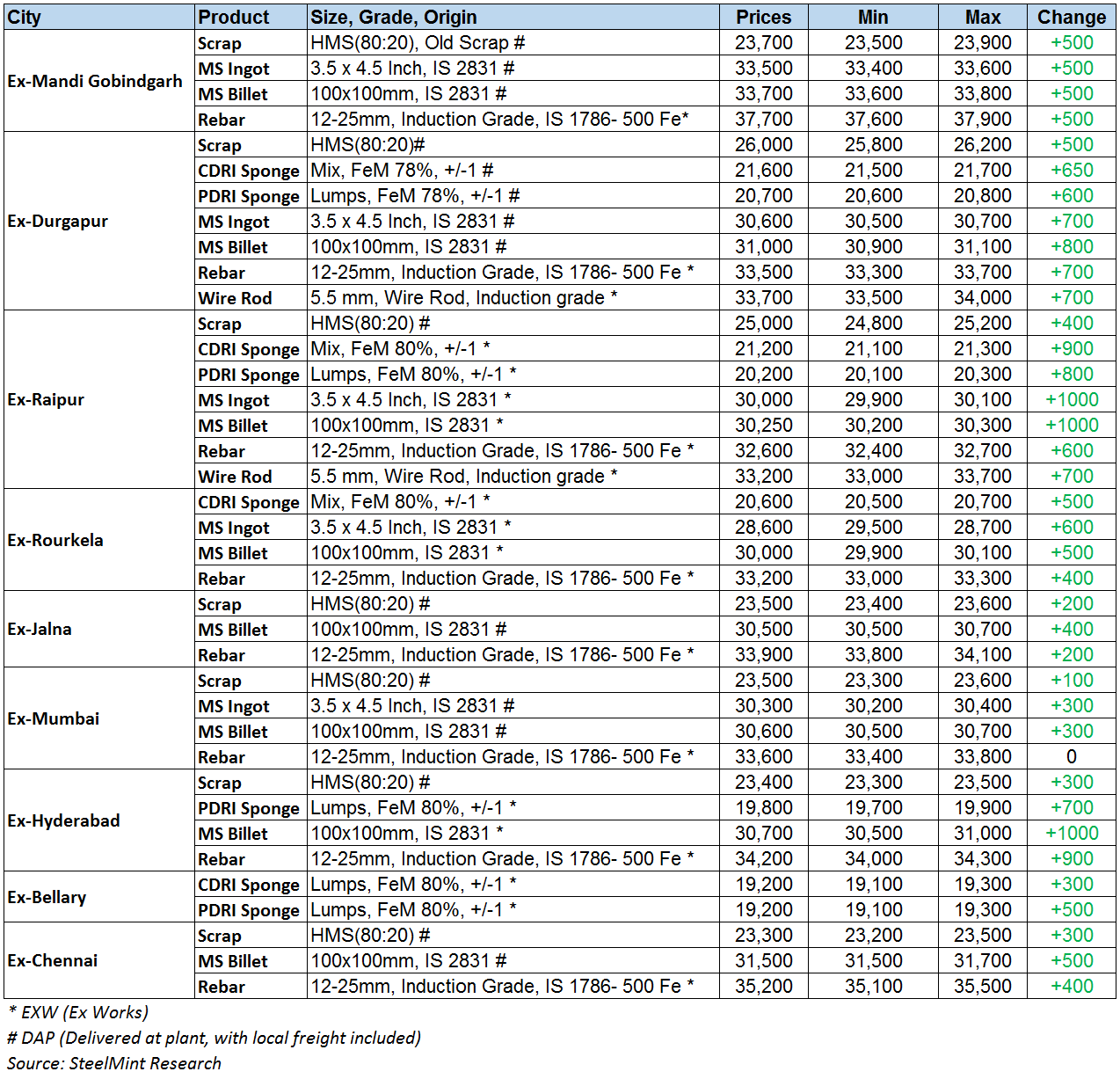 Vietnam mills have resumed imported HRC bookings at increased prices, SteelMint learned from its trade channels. Major exporting nations – China and India have raised imported HRC offers by around $10/t  and Japan and South Korea have increased by $5-10/t on a weekly basis.

Imported HRC offers from India to Vietnam have hit almost seven-months high as similar levels were last recorded in the month of Feb’20, as per data maintained with SteelMint.

1. Indian mills to lower export volumes: Major Indian steel mills have limited allocation for exports since they have shifted their focus to domestic sales. Thus mills have raised their HRC export offers to Vietnam. Indian domestic HRC prices have increased by around INR 3,500/t m-o-m so far in Aug and are hovering at one-year high levels. Also few mills are likely to undergo maintenance shutdown which may keep supplies tight in near term.

2. Chinese steel mills are less interested to export at lower prices– Steelmakers in China have exported HRC to Vietnam after a long time since they are less interested to offer material at lower prices on robust demand in the domestic market. Also, Chinese steel mills have limited allocations for Vietnam due to competitive pricing from India. Meanwhile, China is offering HRC to other markets at higher prices.

3. Japanese and Korean mills focusing on domestic sales- Japanese mills are also observing demand recovery and mills are ramping up production, thus they are less active in export market.

Domestic offers continue to remain competitive – On the other hand, Vietnam’s domestic mill Formosa Ha Tinh is offering HRC (SAE1006, skin pass) at $505/t CFR basis for Oct deliveries, and it is open for negotiations. The company is, however, offering differential pricing for various kinds of customers, said a source.

Meanwhile, the HoaPhat group has reported the successful commencement of blast furnace No 3 on 24th Aug’20 which will increase the domestic supply of HRC and may reduce reliance on imports. 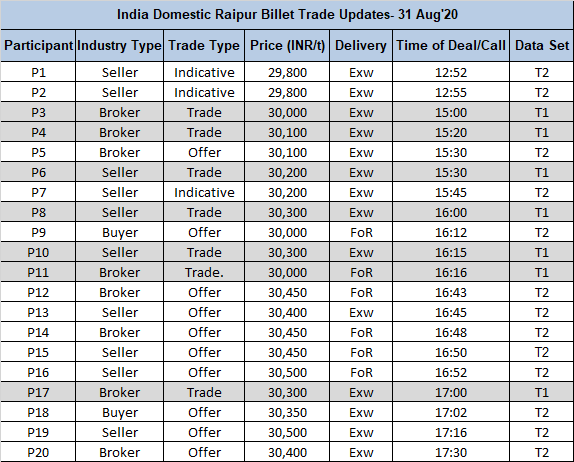 T1: Trade
T2: Offer/Bid/Indicative
Offer and Trade reported during 11:00 to 14:30 IST are not considered in the index calculation 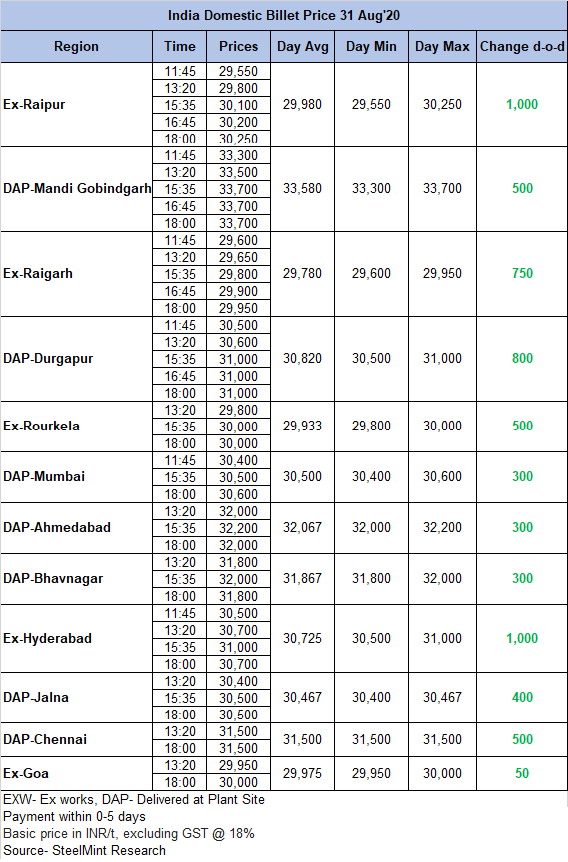 Notably, the DCU (Delayed Coker Unit) of IOC’s largest refinery at Paradip had been undergoing maintenance shutdown since 25 Jul’20.

It normally takes few days’ time to start pet coke dispatches, as the daily production gets stored in the yard. This helps in smooth operation for dispatching the supplies by road as well as by rail.

There was no production of pet coke for almost 25 days at Paradip. Considering the refinery’s monthly production of 110 kilotons (kt), it is expected that total availability of pet coke was reduced by 75-80 kt during this period.

As the ready stock of pet coke at the time of commencing shutdown was even less than 10 kt, many customers are running at low stock levels. These customers have been eagerly waiting to begin procurement of pet coke. Therefore, the demand is anticipated to be quite high initially, and it will take some time for it to normalize.

Market participants expect that as the pet coke demand at Paradip will remain high for coming weeks, it may send the commodity’s prices upward again in the next month, as the price revision is due in this week.

In the month of August, the price was increased at Paradip by INR 1500/t, while increase by Reliance Industries Ltd. (RIL) was merely by INR 520/t. This is apart from the firming of pet coke prices in the international market during the current month.

Melting scrap prices improved by INR 200-300/t d-o-d to INR 23,500/t and INR 24,700/t in Jalna and Alang market, respectively, owing to improved sentiments across the region. SteelMint learned from market participants that near term prices may inch up further due to inadequate availability as well as improved buying inquiries in finish steel.