Price parity with the international manganese ore prices:
According to Customs, Indian manganese ore imports registered a significant hike of 73% m-o-m in Sep’20. Meanwhile, the majority of imports happened for grades between 35% to 44%. Thus, maintaining price parity with international prices becomes very crucial. Last month, the prices of MOIL were higher than the imported ores, however, logistics is always in favour of MOIL for supply to Raipur-based manganese alloys producers (close proximity to MOIL), and also as immediate delivery is possible from MOIL, but not from imports.

International prices of manganese ore registered a fall of 7% for South African Mn 37% CNF India, owing to the downtrending steel market in India and higher inventories at the Chinese ports. MOIL has had to reduce its prices to maintain price parity with import prices.

Downstream Alloy Prices:
Last month, when MOIL increased the prices by 7.5%, it went against the expectations of the domestic manganese alloys producers. Meanwhile, in the current month, prices of silico manganese registered a fall 3% in Raipur and 4% in Durgapur owing to dull demand in the market. The market expectation for Nov’20 was that MOIL will reduce prices by 15%. However, this marginal reduction might not bring a sigh of relief to the silico manganese producers.

Steel Authority of India Limited (SAIL) conducted e-auctions from its Odisha and Chhattisgarh mines. The company received bids for entire quantity put to auction. In the auction conducted from Bolani mines, bids for 104,000 t fines (Fe 62.5%) stood at INR 3,180-3,200/t (loaded into rakes and excluding royalty). The bids fetched are up by INR 700/t against last auction conducted in 1st week of Oct.

The SAIL tender for procurement of 11,345t ferro silicon was issued to meet the requirement of its various plants between Jan-Apr’21. Eight companies participated in the techno commercial round, and the reverse auction is expected to be conducted in the second week of November.

Iron ore prices in Odisha have increased further due to tight availability in merchant market. Miners like Rungta, Essel Mining raised fines offer by INR 200-250/t. Orissa Mining Corp has raised iron ore base price by INR 200/t for upcoming auction. NMDC is yet to announce its price revision.

India’s state-owned steelmaker, Steel Authority of India Limited (SAIL) has sold over 1.5 mnt t of iron ore fines in the merchant market through auctions so far in CY’20 (till Oct) as per data maintained with SteelMint.

Odisha’s leading miner – Odisha Mining Corp (OMC) has scheduled its next iron ore e-auction on 3rd Nov’20. The auction is being conducted for 545,000 t iron ore fines. The miner has increased the base price by INR 200/t against last auction’s base price held in Sep’20. 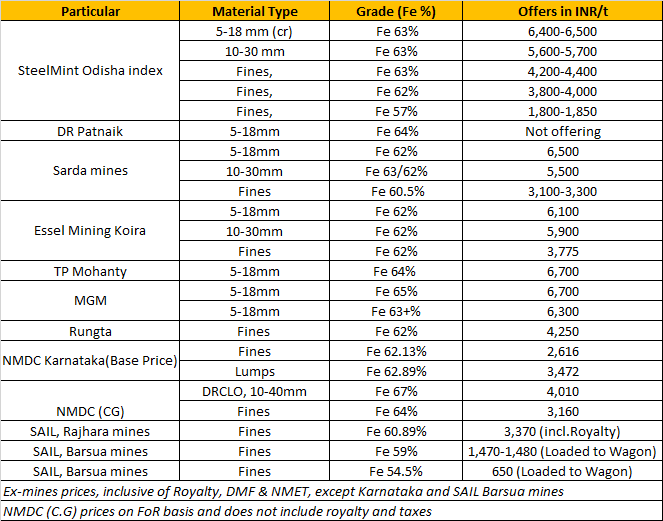 On the other hand, the finished long steel market of mid scale mills have noticed limited buying inquiries & trade activities in the market. However, strengthening semis prices have pushed rebar manufacturers to increase the offers by INR 200-1,500/t w-o-w in major markets.

In context to finished flat steel, domestic HRC prices in India have increased by INR 250/t w-o-w in the trade market as key Indian players announced a second hike in prices in October.

Imported scrap offers moved up further, following a global price trend. Tight scrap availability remained the major issue behind price uptrend because of the low scrap generation due to the pandemic. Major scrap supplier countries are now entering into another lockdown phase, as many countries facing problems due to second wave of COVID-19 pandemic. While steelmakers actively restocking ahead of winter holidays and expected a further price hike on the back of the recent hike in sponge prices.

India’s finish long steel market of mid-sized mills in this week have gone through with moderate response in terms of buying inquiries & trade activities in the market. As per our conversation with rebar manufacturers they didn’t observe adequate demand in the market but high raw material cost have pushed them to increase the offer in rebar by INR 200-700/t w-o-w in most of the major markets, except in Bangalore where prices surged more than INR 1,500/t. 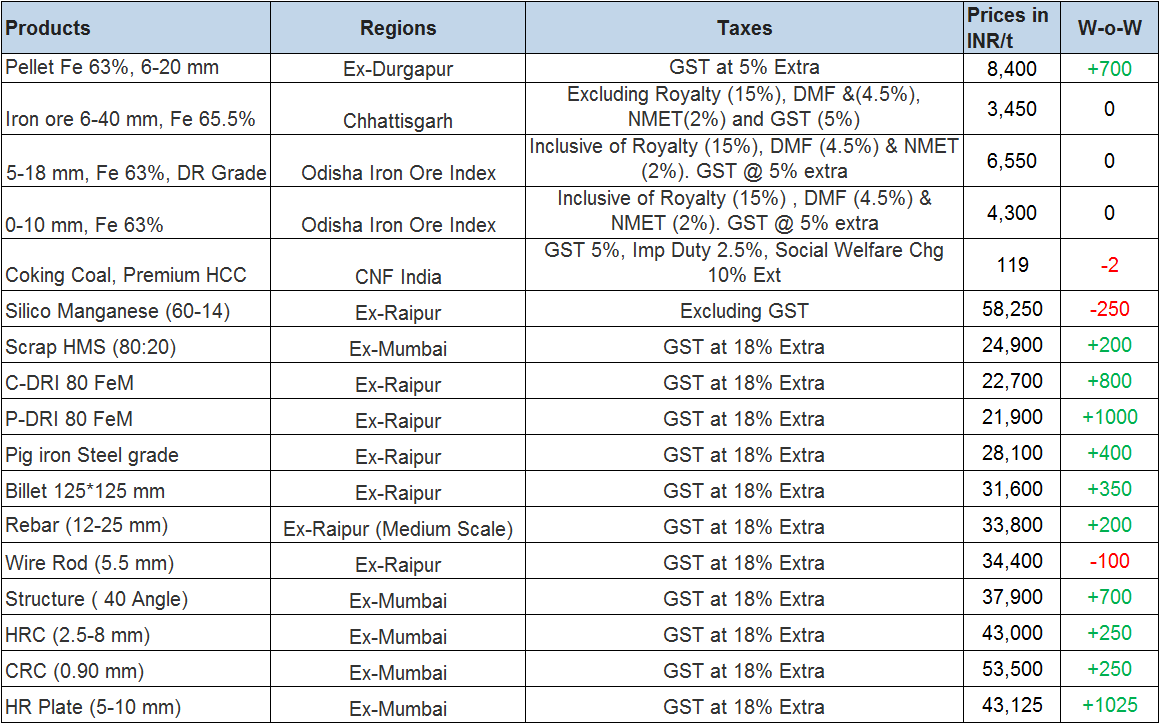 Until this week, Australian coking coal prices have been crashing as demand sentiment weakened amid growing panic over the impact of probable coal import restrictions in China.

Oversupply could be stemming from Chinese demand loss, weighing down on prices—

Despite several November laycan cargoes of Australian premium coking coals being offered at competitive prices, there is no incremental demand to liquidate the excess supply. This is because there has not been any significant improvement in steel product sales across major countries importing coking coal from Australia, viz. Japan, India and South Korea.

Indian market participants are also treading carefully while awaiting clarification on the rumored Chinese ban on Australian coal imports, because it will inevitably reduce demand for Australian coking coal, and near-term prices should decrease further.

There is an increased risk of supply disruptions in Australia from La Nina wet weather conditions, which could reverse the negative price effects of an imminent oversupply situation looming in the Australian coking coal export market.

Latest prices for the Premium HCC and the 64 Mid Vol HCC grades are assessed at around $109/t and $100/t FoB Hay Point, Australia.

For Indian buyers, these prices amount to $121/t and $117/t respectively on CNF India basis.

Australian coking coal prices are likely to be adversely affected in the short term, though demand has been picking up from key importers outside of China, viz. India, Japan and South Korea.

Nevertheless, the seaborne coking coal market outside Australia is expected to strengthen in the ongoing quarter amid continued recovery in steel demand from full-fledged resumption of industrial and construction activities in China.

Meanwhile coal importers in China have turned away from the seaborne market following the widespread rumor on the country’s possible ban on Australian coal imports.

With China’s steel production running at record levels, steelmakers have been obliged to seek alternative coking coal supply, after Australian coal sales to China came under an informal ban.

While steel mills in China turned to countries such as Mongolia, Russia and Canada to source premium hard coking coal. However, the spot availability of alternative origins is low, forcing Chinese steelmakers to use more expensive domestic coking coals, thereby eroding their profit margins.

Alternative seaborne origins such as Canada, the US, Mozambique, Russia and Mongolia are mostly overbooked, or in short supply. Besides, it takes long time to ship coal from the Americas to northern China, which would result in late arrivals for Chinese buyers seeking spot cargoes to cover immediate restocking needs.

Furthermore, spot availability of coking coal from Russia and Mozambique is reportedly tight at present.

In consideration of the restrictions on Australian coal imports, many Chinese steel mills have expressed concerns that met coke prices would increase due to shortage of coking coal supply, thereby squeezing steel margins.

Coking coal supply tightness, coupled with de-capacity and replacement measures, have already pushed up the country’s met coke export prices to such high levels which are incompetent against other exporting nations.

Chinese steel mills fear that coke producers might propose another round of price hike in the near term, even after the fifth round of uptick by CNY 50/t has been largely accepted by steelmakers in Hebei and Shandong.

Why this index? India’s National Steel Recycling policy mentioned that the efficient use of scrap for steel production becomes very crucial for India as 35-40% share has been envisaged from scrap-based steel production in the journey of 300 mn t pa by 2030. This shall increase the requirement of steel scrap sharply from the present level of around 30 mnt.

To provide feedback on this index or if you would like to contribute by becoming a data partner, please contact – abhishek.bhalla@steelmint.com

Around 170 ships have been demolished worldwide in the third quarter of 2020, as per the report released by NGO Ship Breaking Platform. Out of it, around 110 ships were brought in South Asia, which is a rise of 70% as against the second quarter. However, several yards remained closed during Q2 due to the Covid-19 pandemic.