China’s Jiangsu Shagang is set to invest RMB 14.8 billion in a steel integration project which consists of integration and reorganization of some private enterprises in Henan’s Anyang city. The completion of this project will result to an increase in the iron making capacity to 4.94 mn t and steel-making capacity to 5.5 mn t, making it a competitive player of construction steel in central China.

Last week a deal was heard to have concluded with China’s major – Baosteel at $603/t CFR Vietnam. Few market sources also highlighted another Chinese HRC deal has concluded at $610/t CFR Vietnam levels towards the closing of last week.

Price rally expected to continue in the near term due to:

2.Indian mills remain less active for exports- Indian mills are not much active in offering HRC for export to Vietnam on higher domestic prices and tight supply. 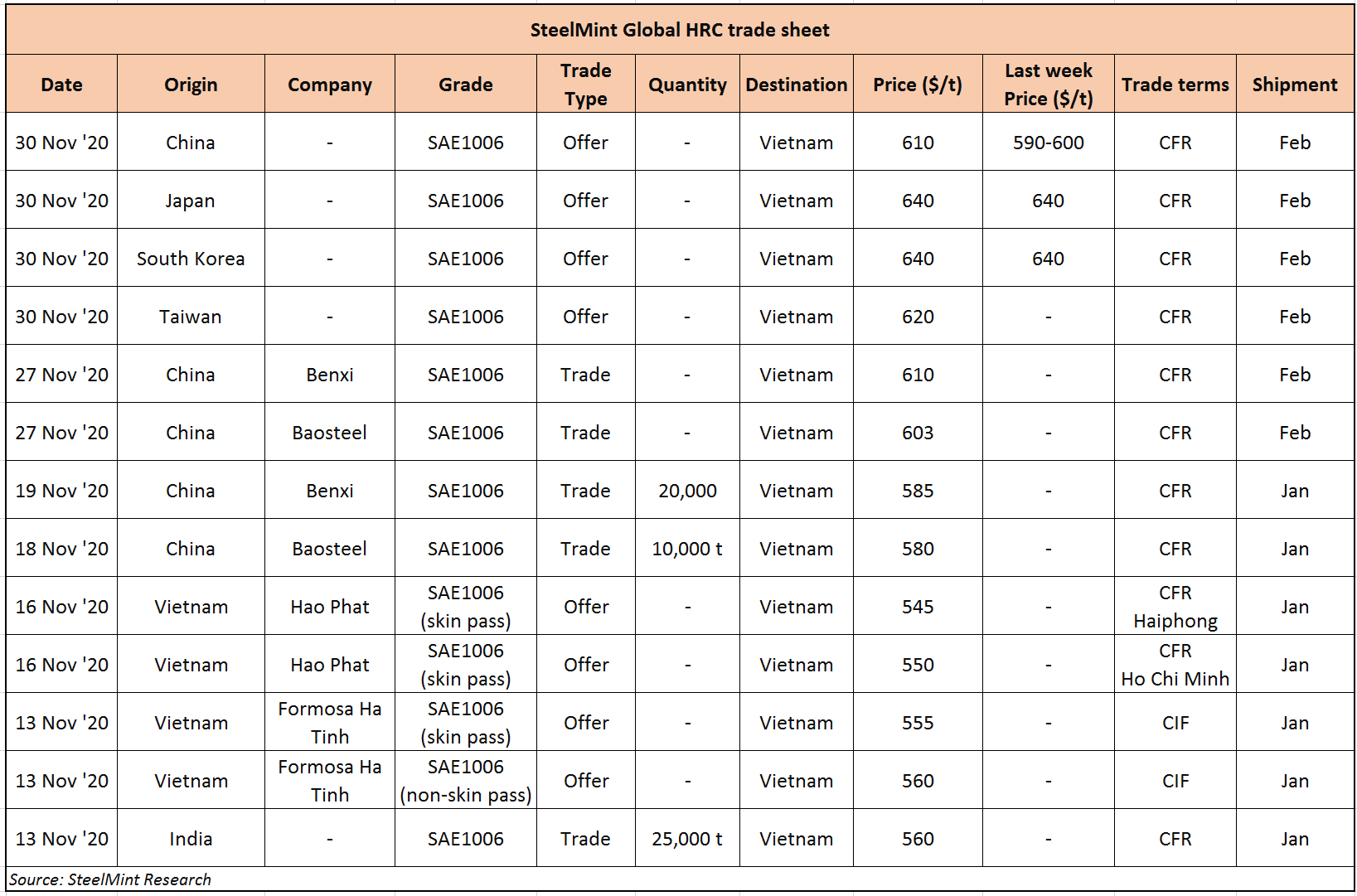 Indian secondary rebar market remained strong with an increase in prices by INR 200-500/t d-o-d. Hike in billet prices improved buying inquiries and trades in rebar, mainly in the western region, which led to a rise in rebar price. Also, few mills raised offers to match up with others, sources shared SteelMint.

SteelMint’s benchmark sponge iron price assessment moved up by INR 400/t (d-o-d) in Raipur (central India) on improved demand. A total of 2,500-3,000 t P-DRI trades have been reported today by local plants at INR 24,800-25,000/t exw, while about 2,000 t trades have been reported from Raigarh at INR 25,000/t on FoR Raipur basis. There are assumptions that price may further increase tomorrow following active trades and strengthening billet prices.

The prices increased majorly in central, western & northern India by INR 500-800/t on account of improved finished steel demand & tightening supply of scrap along with increasing offers. Following the trend, a rise of INR 100-500/t was observed in southern & eastern regions. 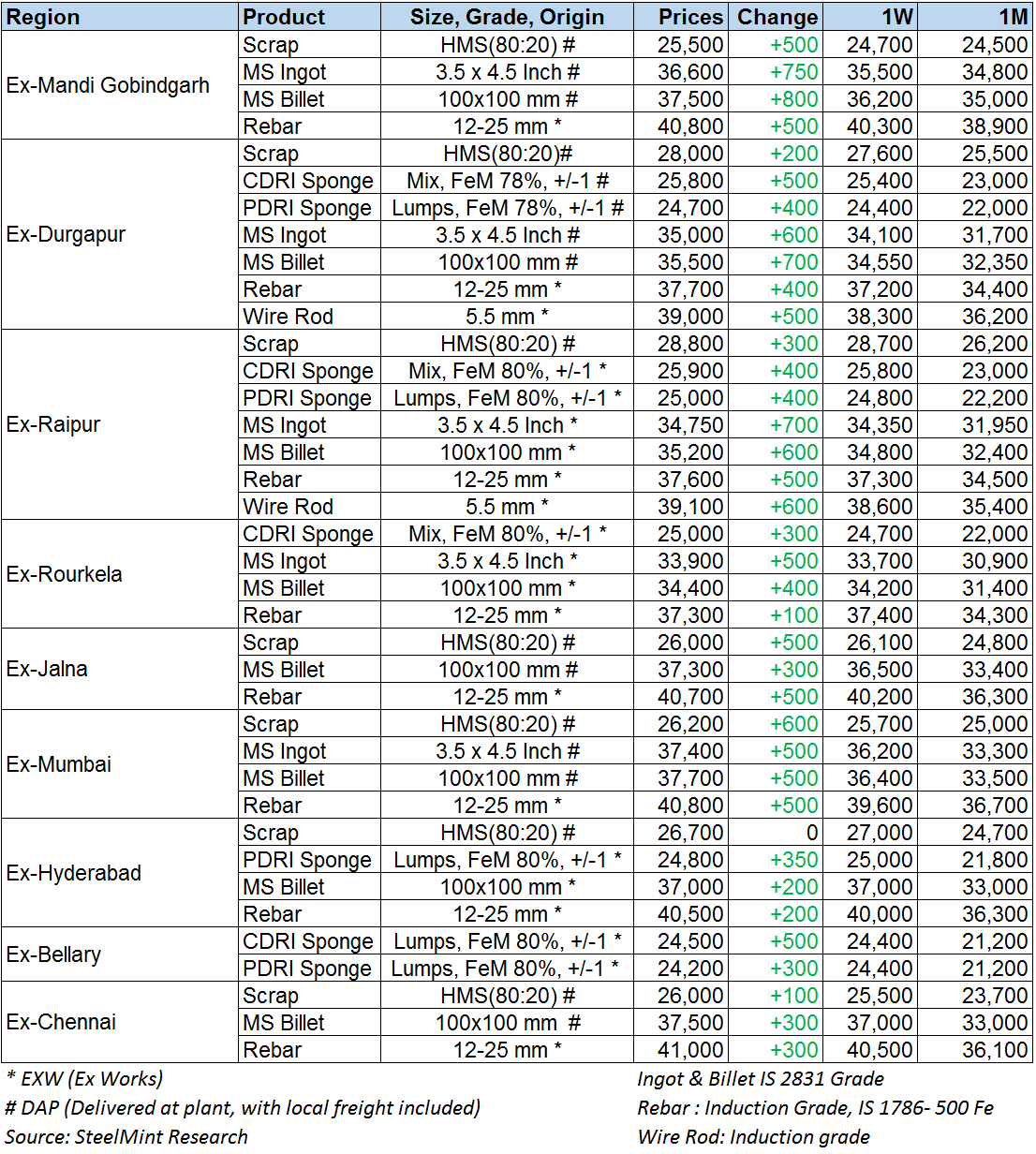 Japan- the world’s leading ferrous scrap supplier witnessed an increase by 22% to 0.89 mn t in Oct’20 as against 0.73 mn t in Sep’20, as per data recorded with SteelMint. Vietnam remained the major buyer and imported 0.37 mn t in Oct’20. Active inquiries for Vietnam origin billets from China, supported scrap buying.

Prevailing positive trends due to expected further hike in finished steel prices by primary mills along with strengthening of raw material prices, resulted in surge in billet prices in Indian domestic market. 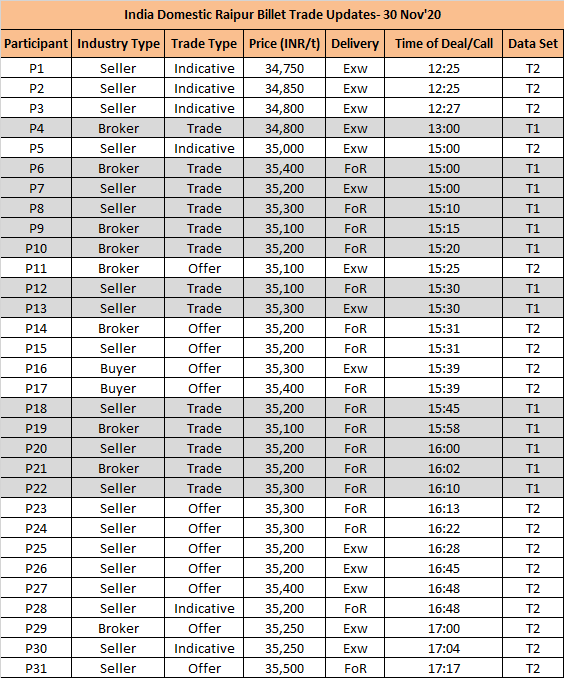 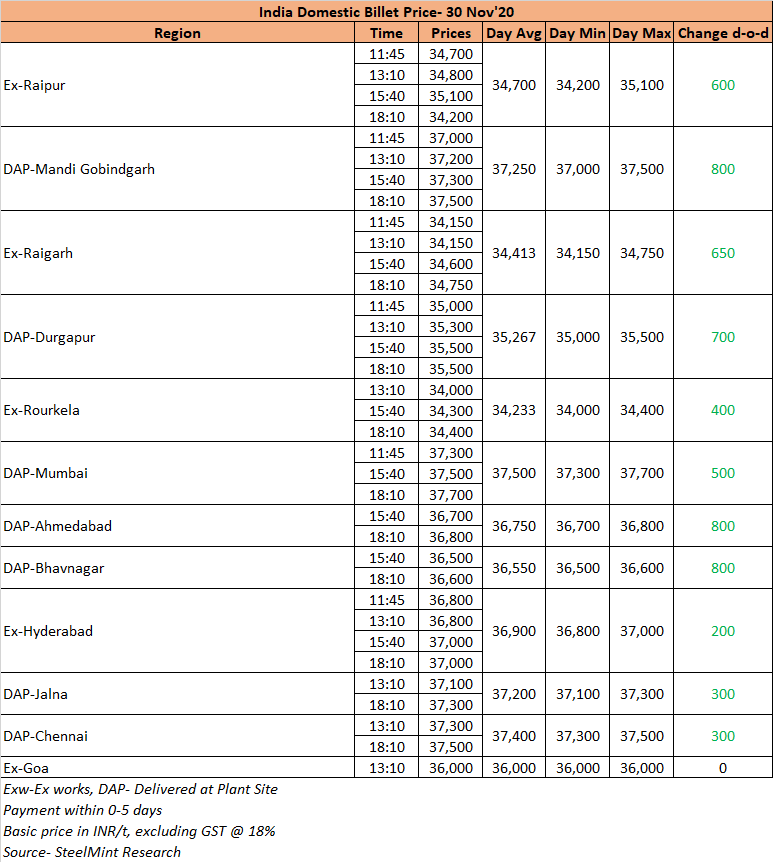 Imported scrap market in South East Asia has witnessed further hike in offers with Vietnam remaining the most active amongst other nations. Offers have increased significantly over a week, while global suppliers are more likely to involve in better deals as mostly South Asian steel mills are currently more active in bookings ahead of winter holidays.

The steel industry has maintained its steady growth despite the COVID-19 pandemic, recording 2.3% growth in the second quarter and 5.6 % in the third quarter of 2020, as per reports.

Results of the auctions are enumerated as follows:

Delivery period for the within-state e-auctions will be for 45 days. Accordingly, intrastate dispatches has commenced from 27th Nov’20 till 10th Jan’21.

This auction received a good response and entire quantity was sold out at Barauni refinery for both Groups A and B materials. While Group A was sold at the reserve price of INR 19,080/t, Group B was sold at a premium of INR 40/t at INR 18,620/t.

Meanwhile, the response at Koyali refinery is also quite satisfactory considering the lower customer base in Gujarat. In all probability, this is the highest quantity ever sold in an intrastate auction at Koyali.

Outside-State auctions have been scheduled for Koyali refinery on 28th Nov’20 for the leftover quantity of 12,300 t from the Within-State auction.

The changes in reserve prices in this auction as compared to the last auction are as follows:

Market participants expect that there would be good response from the Outside-State consumers in the forthcoming auction. This is due to the fact that at present the availability of anode grade RPC is very limited in the international market.