Primary mills, which produce steel through the blast furnace route & contribute about 60% of India’s steel production are soon to declare finished long steel offers for March deliveries. These prices are expected to be hiked, SteelMint learned from its market sources.

The prices are expected to rally by about INR 1,000-1,500/t ($14-21), especially in rebars through the primary mills and the key factors behind this are mentioned below:

Healthy Finished steel export orders – Amidst moderate domestic demand, since the second half of Jan’21, the mills turned towards exports & have good orders for rebars. As per our analysis, around 170,000 t rebars deals have been concluded during Feb’21, for which deliveries are to be made in March-April this year.

Price rally by mid-size mills – With significant hike in prices by the Induction grade rebar producers, the price gap has narrowed down to around INR 4,000/t. This seems to influence primary mills to keep prices strong for the coming month. Rebar prices have been increased by INR 2,000-3,000/t by the mid-sized mills, however by primary mills it fell in the same proportion in Feb’21. This has resulted in closing the price gap between the primary & mid-sized mills rebar prices.

SteelMint’s domestic steel scrap index has risen by INR 400/t today and is assessed at INR 34,300/t DAP Mandi Gobindgarh basis. Few trades have been recorded at higher prices amid limited supply constraints. In addition to it, imported scrap prices in India have also risen by around $30/t w-o-w on global cues.

Today, 12 sets of trades, indicative prices/bids/offers were recorded in the publishing window.

Why this index? India’s National Steel Recycling policy mentioned that the efficient use of scrap for steel production becomes very crucial for India as 35-40% share has been envisaged from scrap-based steel production in the journey of 300 mn t pa by 2030. This shall increase the requirement of steel scrap sharply from the present level of around 30 mn t.

To provide feedback on this index or if you would like to contribute by becoming a data partner, please contact – info@steelmint.com

Steel Authority of India Ltd (SAIL) conducted an auction from its Barsua mines in Odisha on 23rd Feb. 104,000 t iron ore fines (Fe 60.8%) were put up for auction. Entire material put to auction received bids at INR 2,100-2,110/t (loaded into rakes and excluding royalty), SteelMint learned from sources. Bid prices have come down by INR 770/t against its previous auction held on 03 Feb’21.

In another confirmed trade, a miner has booked around 50,000t iron ore fines (Fe 63%) from its Odisha mines this week at INR 5,200/t (ex-mines, including royalty, DMF & NMET). Hence, both the deals of SAIL & Serajuddin were taken under consideration as T1 Trade and given 50% weightage in this index.

SteelMint has also received six (6) offers, indicative prices under T2 trade in this publishing window out of those five (5) were taken into consideration and given 50% weightage. To see SteelMint’s iron ore assessments, pricing methodology and specification documents,Click here.

Bids remain largely stable in SAIL’s iron ore auction from Chhattisgarh: Steel Authority of India Ltd (SAIL) conducted an auction from its Rajhara mines (Chhattisgarh) on 26 Feb’21, for 84,000 iron ore fines (Fe 58.1-60.37%). Out of the total quantity offered only 28,000 t (Fe 60.37%) received bids at INR 3,350/t (loaded into rakes and including royalty). Bids have remained largely stable against its previous auction conducted towards early Feb’21.

DR-CLO receives active response in NMDC’s CG iron ore auction – NMDC conducted iron ore e-auctions on 25th Feb for 701,400t iron ore from its Chhattisgarh mines. Offered quantity comprised of 600,600 t of fines, 50,400 t DR CLO and rest comprised of lump and ROM. The DR-CLO lots received a good response and bids increased by around INR 820/t over the set base price, as it is still cost-effective than other substitutes. However, ROM lots fetched flat bids and that of lump moved up slightly by INR 80/t, SteelMint gathered from sources.

As per SteelMint’s price assessment, domestic sponge iron and billet offers increased by INR 200-1,800/t across India with a major increase seen in Western India. Also, the rebar market has witnessed an upward trend this week and the prices have moved up by INR 400-1,300/t w-o-w basis in most of the major supplying locations.

In context to finished flats, domestic HRC prices have seen a slight improvement by INR 250/t as compared to last week. However, mills have actively booked quantities for export on bullish global market sentiments.

Short-term market outlook remains bearish on limited buying interest, as buyers became cautious and retreated to the sidelines amid volatility in the ex-Chinese markets. Australian coking coal prices are largely anticipated to remain at lower levels until the Chinese import ban on Australian coals is lifted.

Imported scrap prices in India too surged significantly on the back of hike in global scrap prices. However, Indian mills remained slow, since past one month, in booking fresh slots for March shipments. Most of the buyers are purchasing local scrap as it’s cheaper than imported scrap.

Indian scrap prices are still behind as compared to a global market. Market insiders believe that prices are likely to go up further by $10-20 and buyers may come back next week. Few deals for 500-700 t of shredded have been booked at a $465-475/t CFR basis, activities have slightly picked up this week.

India’s finish long steel market via induction route has witnessed an upward price trend in this week, and the rebar prices moved up by INR 400-1,300/t w-o-w basis in all over the major supplying locations.

India’s domestic HRC prices remained range-bound this week. SteelMint’s benchmark prices for 2.5 mm thickness HRC stands at INR 53,500-54,500/t exy Mumbai, up by INR 250/t as compared to last week. Prices are expected to bearish in the near term as:

On the other hand, mills have increased their export allocations and are not facing any pressure to sell material at local markets.Currently, mills have raised HRC export offers by $15-25/t and offering around $740-750/t CFR Vietnam,$750/CFR to UAE, and around $825/t CFR to Europe for late March early April shipments. 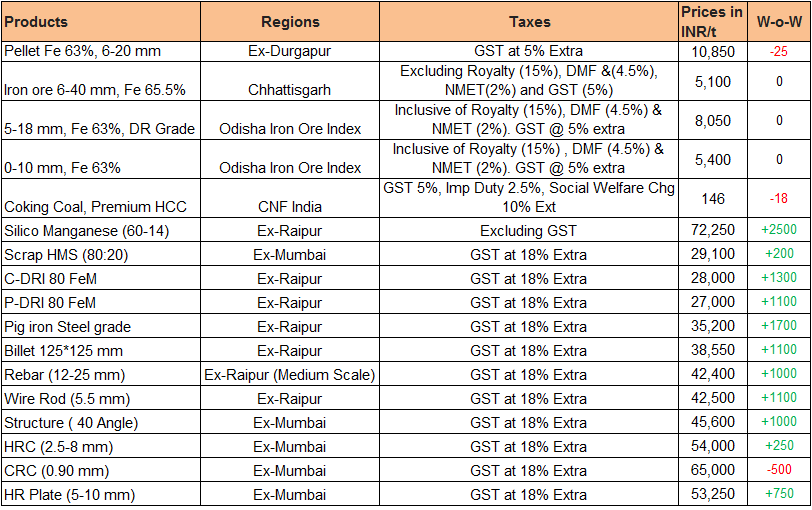 Indian government-owned SAIL has scheduled two auctions for a total of 12,550 t pig iron. The first auction is to be held on 03 Mar’21 for 8,550 t from Bokaro Steel Plant while the second auction is to be conducted on 04 Mar’21 from IISCO, Burnpur for 4,000 t. The previous auction from Bokaro was concluded at INR 33,150/t exw and the last auction from IISCO received bids at INR 32,000/t exw.

The domestic HR-plate price rebounded this week after six weeks of subdued demand and dull trades dragging the prices down in the trade segment. SteelMint’s benchmark assessment for the HR-plate (IS 2062/E350) for 5-10mm has increased by INR 750/t and stands at INR 53,000-53,500/t exy-Mumbai. Price is exclusive of GST @ 18%. However, in other market trades remain subdued on bearish demand and slow buying.

Plate prices may correct further due to the following factors:

2. Few projects are on hold- “Orders booked are 30-40% less as compared to previous month bookings,” shared by major plate producers to SteelMint. Most of the projects are held up. Even export orders in some segments like oil and gas are held up as they are waiting for the new policies by US President Joe Biden. Due to these factors, buying activities reduced which may lead to further correction in prices

3. Higher inventories- Inventory levels in the retail segment are high on slower trades for over a month. Traders have been trying to liquidate their inventories since the prices started to fall in mid-Jan ’20 while trying to maintain their profit margins.

Export offers are expected to remain on the higher side on resumption of trades post the week long Lunar New Year holidays.

Near-term outlook on Indian plate prices- One of the major steel mills has started offering discounts on plates to escalate buying in the domestic market. Also, market participants believe that mills might roll over or even provide discounts for year-end clearance. However global plate prices are expected to increase on possible export rebate cuts in China.

Japan – the world’s leading ferrous scrap supplier seen a drop in scrap imports by 34% m-o-m and stood at 0.48 mn t in Jan’21, as per data recorded with SteelMint. Vietnam continued to be the largest buyer, followed by South Korea and Taiwan. Higher Japanese scrap export prices resulted in decline exports in Jan’21 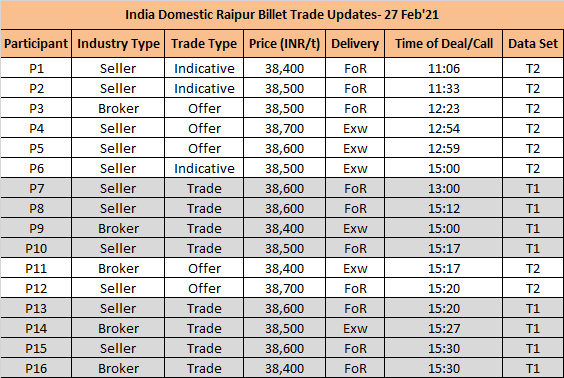 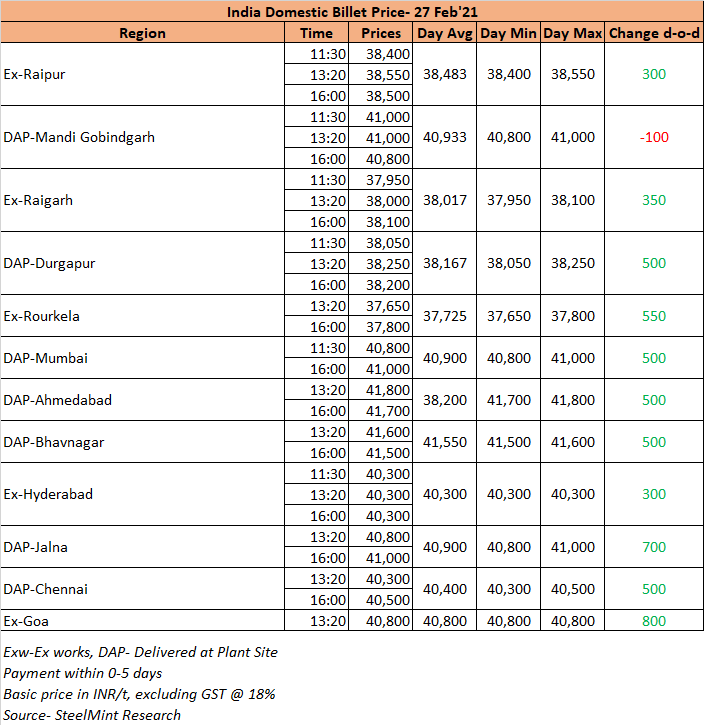 Indian steel industry emerges from COVID setback, demand green shoots seen: Indian steel industry witnessed a decline in steel output which fell by 12% y-o-y in CY’20 owing to reduced capacity utilization during the lockdown. Domestic iron ore supply shortage pushed up the prices to record high levels on the delayed resumption of auctioned leases in Odisha. However, with easing of lockdown measures and pent-up demand from the auto & construction sector, mills ramped up capacity utilization to over 90-95% towards year-end from 30-40% in Apr’20.