P.K. Rath, CMD of state-owned Rashtriya Ispat Nigam Ltd (RINL), is superannuating on 31 May’21 after serving the company for 38 years. Kishore Chandra Das, Director (Personnel), RINL, is taking additional charge as CMD of the company from 1 to 30 June’21 or until the new incumbent joins – pending further directions from the Ministry of Steel, sources told SteelMint. Das took over the reins of RINL’s Personnel Department in 2017.

“Currently, rebar consumption is weak and is likely to reduce further. Lower billet export offers have influenced rebar prices which should decrease to foster sales volumes,” said a prominent market insider from Vietnam.

South Vietnam’s business hub, Ho Chi Minh City, will likely begin lockdown for 15 days from May 31 in an effort to control the spread of Covid-19. The city has seen a rise in cases related to a religious mission that has recorded maximum positive tests, accounting for most of the city’s infections, according to a government statement.

Indonesian imported scrap offers fall $40/t: In Indonesia, the market was very quiet. Steel mills and buyers preferred to wait and watch as they expected prices to go down further in the near future. Imported PNS scrap offers fell significantly by $40/t w-o-w to $480-485/t CFR Indonesia levels.

“After a week-long boom in scrap prices globally, the market has started reversing this week with the falling South East Asian markets,”, said an Indonesia-based scrap trader.

Jindal Saw Limited, a leading global manufacturer and supplier of iron and steel pipe products, pipe accessories and pellets, reported a 30.43% year-on-year (y-o-y) growth in its consolidated revenues for the Mar ’21 quarter (Q4FY’20) at INR 3,783.85 crore. On a sequential basis, total sales revenues were up 32.09% compared to INR 2,864.68 cr in the Dec ’20 quarter(Q3). SteelMint learnt the following points via an investors’ call by the company.

1.Production of SAW pipes-During Q4, the company produced 1,79,000 t of pipes against 1,57,000 t pipes in Q4. There were delays in order execution due to erratic supply of raw material. However, orders remained fully protected from the sharp global increase in steel and oil prices. The government’s focus on infra spending helped boost domestic demand in oil, gas and water segments, which, in turn, acting in favour of the company.

The segment saw improved profitability, backed by the increase in the iron ore and steel prices. It is expected that enhanced steel demand on the back of a revival in infra and construction support the margin momentum.

4.Institutional debt-During Q4 net institutional debt (at a standalone level) was around INR 2.98 crore compared to INR 3.35 crore in the year-ago period, including long-term loans and fund-based working capital.

On the other hand, financial expenses came down largely on account of correction in capital structure and tight credit control.

5.Rising steel prices-Despite Covid-19-led disruptions, the company has shown improvement in sales and order book in Q4 compared to Q4 FY ’20. This quarter saw significant increase in prices of iron ore and steel which disrupted regular supply of steel, primarily from the domestic steel suppliers, impacting the company’s operations in Q3 and Q4. A slowdown was witnessed in the water segment owing to high input costs despite the huge allocations in the sector.

However, JSAW is passing on the increased raw material costs to its customers. It feels steel prices will correct in the near-term and are thus, not really a concern.

6.Restructuring of subsidiaries-JSAW plans to structurally merge its three subsidiaries, Jindal Fittings Limited, Jindal JPGL and Jindal Tubular(India) Limited. The merger will see greater synergy and, operational efficiency due to optimal utilization of resources of the merged companies, reduction in administrative costs and lean organization with an objective of maximizing value for stakeholders.

9.Healthy order book-In spite of the Covid-19 uncertainties, during Q4, the company booked new orders worth INR 1,400 crore, as against sales of INR 3,175 crore. Majority of these orders pertain to the water segment.

Jindal SAW anticipates a double-digit growth in the next three years. It expects longer-term consumption to gradually revert to pre-pandemic levels, in key end-user industries. India’s requirement is likely to remain subdued owing to the unexpected severity of the second wave. In the immediate term, order booking in export markets may drive visibility for the company.

Punjab State Power Corporation Limited (PSPCL) has hiked power tariff by INR 2 per unit for peak hours i.e. 6.00 pm to 10 pm, and has also revoked the INR 1.25/unit subsidy for night shifts. Further, INR 0.7 paise/unit has been increased for 24 hours starting 1 June’21. The overall impact would be around INR 0.20-0.30 paise/unit, which is not a great cause for concern, as per sources, as it is generally in place during the paddy season.

However, on the supply side, heavy rains in Kalimantan provinces continued to disrupt production and coal transportation, further tightening limited coal supply from the country which led to a dramatic fall in prices. Cargo availability also remained under pressure last week, as per market sources.

The Chinese government has been recently concerned about the sharp rise in commodity prices that would raise inflation fears. This may, further dent the economic growth as rallying raw material prices are forcing manufacturers to raise the costs of finished goods.
A few days back, China’s National Development and Reform Commission summoned leaders of top metals producing companies over soaring commodity prices. It said that the government would show “zero tolerance” for monopoly behaviour and hoarding of metals and will also impose severe punishment for violations.

Amidst the downtrend in domestic coal prices, several Chinese utilities have adopted a wait-and-watch policy with regards to imports, in hope of further correction in domestic thermal coal prices.

The sharp rise in Indonesian coal prices over the last two months had already dented market sentiment in the Indian power, textile, chemicals, and cement industries, which uses imported coal.

Owing to reduced profitability and weak sales volumes this year, several industries were heard to have shifted to domestic coal or increased blending of imported and domestic coals.

“If the raw material prices (thermal coal) keep on rising, despite electricity prices being constant in case of long-term contracts, operating plants will become difficult… The cost gets non-sustainable and then plants would have no option but to operate at a loss or halt production for some time,” a Mumbai-based trader said.

Indian power utilities have thermal coal stock of 28.1 million tonnes (mn t) which is quite sufficient for 16 days, as per the National Power Plant data.

The escalated freight rates, along with lower availability of vessels willing to come in to India amidst Covid restrictions further continue to affect availability of thermal coal for stocking and sales purposes.

According to market participants, portside trades of Indonesian coal has reduced over the last few weeks as only pre-booked vessels are making their way to the country.

As per CoalMint’s vessel updates, 2.03 mn t of thermal coal stock will arrive from Indonesia to Indian ports during 24 May’21- 1 June’21. Mundra Port is set to receive the highest volume at 0.5 mn t, while Navlakhi Port will get 0.4 mn t followed by Kandla Port at 53,150 tonnes.

According to CoalMint’s analysis, Indonesian thermal coal prices are likely to be stable for a brief period as Chinese traders turn cautious amidst rising intervention of the Chinese government and anticipation of a further decline in China’s domestic thermal coal prices.

However, strong demand from the country during summers and shipments delays from Kalimantan due to heavy rains are likely to support any dramatic fall in Indonesian thermal coal prices.

The U.S. Gulf Coast (USGC) FoB prices of pet coke (6% sulphur), widely accepted as the reference across international markets, have increased by $3/t to $78-79/t over $75-76/t prevailing a week ago.

Average shipping freight rates from USGC to Indian ports for Supramax vessels of 50,000-55,000 deadweight tonnes (DWT) are currently assessed at $47-48/t, compared to $45-46/t last week. Thus, there has been an increase of approximately $2/t w-o-w in ocean freight.

This is understood to be primarily driven by reduced usage of high-priced pet coke and increased coal consumption in the fuel mix to manage cement makers’ costs.

Accordingly, the Indian market has been lately observing a considerable decrease in enquiries for seaborne pet coke, alongside lesser number of spot transactions other than existing long-term contracts.

Even as India’s major cement players wait for price corrections in the international pet coke market, not too much is expected in the short term because of tight availability in key source markets like the U.S. and Saudi Arabia.

The sharp increase in pet coke prices because of lower refinery run rates and supply uncertainty have forced cement companies to shift to thermal coal as a fuel and change their purchasing strategy.

India, the world’s second-largest cement producer, is also the biggest market for seaborne pet coke. But pet coke is gradually losing competitiveness against other alternatives like imported thermal coal because the Indian cement industry is switching to Australian high-calorific value (CV) and U.S. mid-CV coals, which are relatively cheaper.

Notably, imported thermal coals on a comparative heat-value basis from the above-mentioned origins are available to Indian cement producers at prices of $90-100/t against pet coke prices of $120-130/t.

Furthermore, as the availability of pet coke still remains constrained, any major price correction is not expected in the near future. Going forward, Indian market participants expect a further decrease in the country’s pet coke import volumes with consumers increasingly switching to thermal coal.

South Korean steelmakers have raised prices of automotive steel for the first time in four years. POSCO, the country’s largest steelmaker and Hyundai Steel Co., the second largest, have reached a deal with Hyundai Motor Co. and Kia Corp. to raise the price of automotive steel to 50,000 won per tonne ($45/t), as per latest reports. About 30% of Hyundai Steel’s overall sales are direct steel sheet sales to Hyundai and Kia. Increasing steel prices are meant to reflect increased costs of the key steelmaking ingredient-iron ore.

Melting scrap prices increased by around INR 300/t on 31 May’21, particularly in the northern region with the firming up of semi-finished steel prices, as per SteelMint reports. However, shipbreaking scrap prices in Gujarat’s Alang cooled off, falling by INR 600/t due to the correction in semi-finished steel prices. The short-term outlook is that prices may find immediate support from the steel market with little possibility of major fluctuations, as per sources.

The index rebounded following optimistic trends globally, especially rising increase steel prices in China along with an expected hike in prices to be announced by the Indian primary steel mills.

Moreover, participants believe iron ore prices are likely to remain strong due to seasonal factors and sources are of the view that prices are expected to stay stiff with the impending expiry of two key merchant iron ore leases in Odisha in Aug’21. 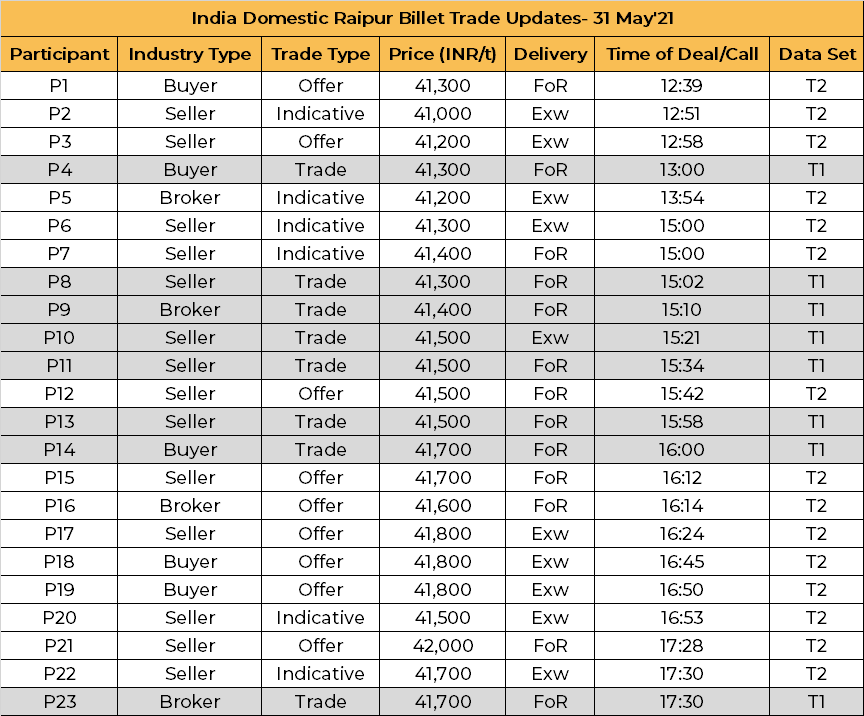 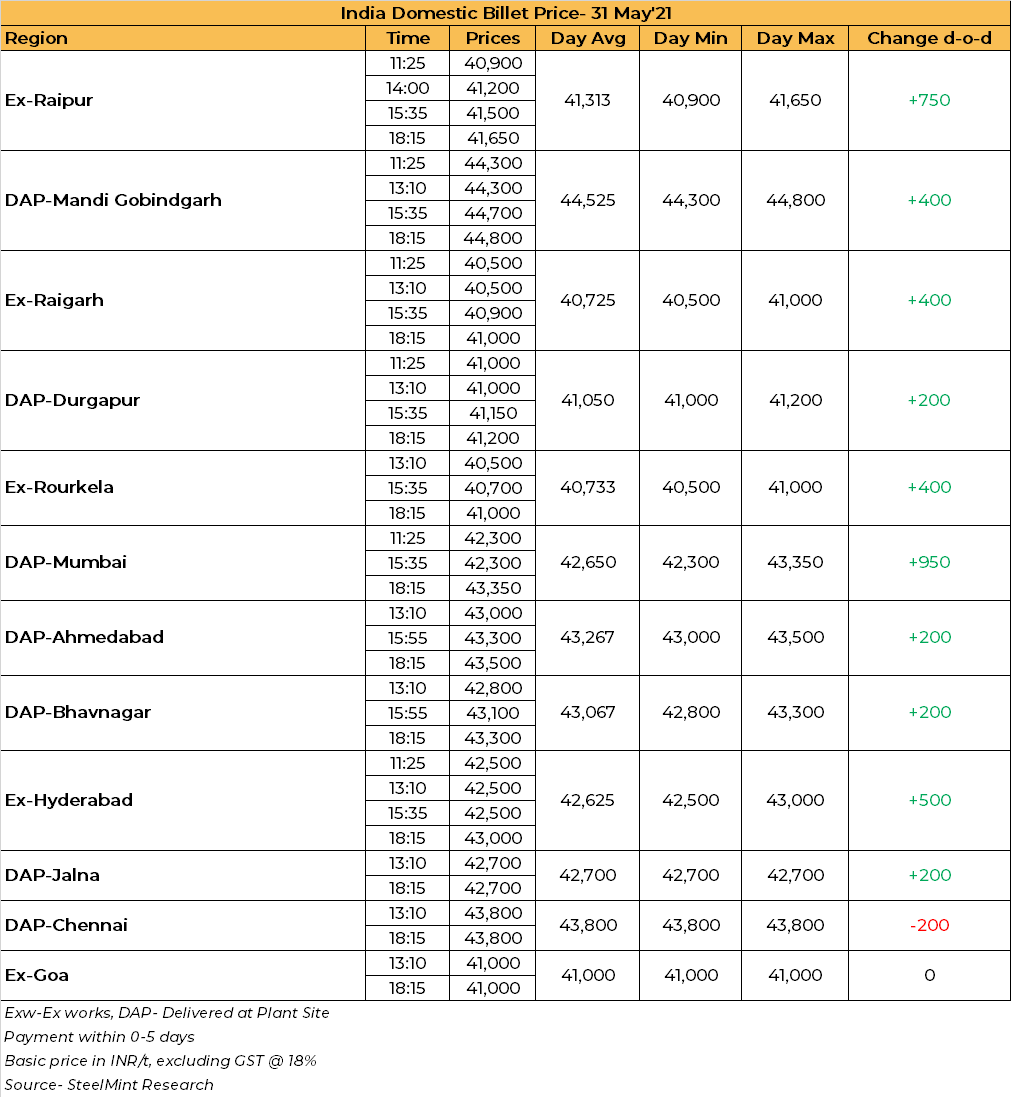 Spot trades in the Indian secondary steel market remained supported on improved bids and prices increased by up to INR 800/t ($11) on a d-o-d basis.

According to SteelMint assessment, Indian sponge iron prices have moved up sharply by INR 100-800/t, with a major increase of INR 600-800/t in central India (including Raigarh and Raipur). Meanwhile, domestic billet offers have also inched by INR 200-800/t in major markets, whereas a slight drop of INR 100-200/t was seen in Mumbai and Chennai.

In addition, induction furnace grade rebar offers have moved up by INR 100-200/t. However, a minor fall of INR 200/t was observed in Raigarh.

Reference prices as on 31st May’21 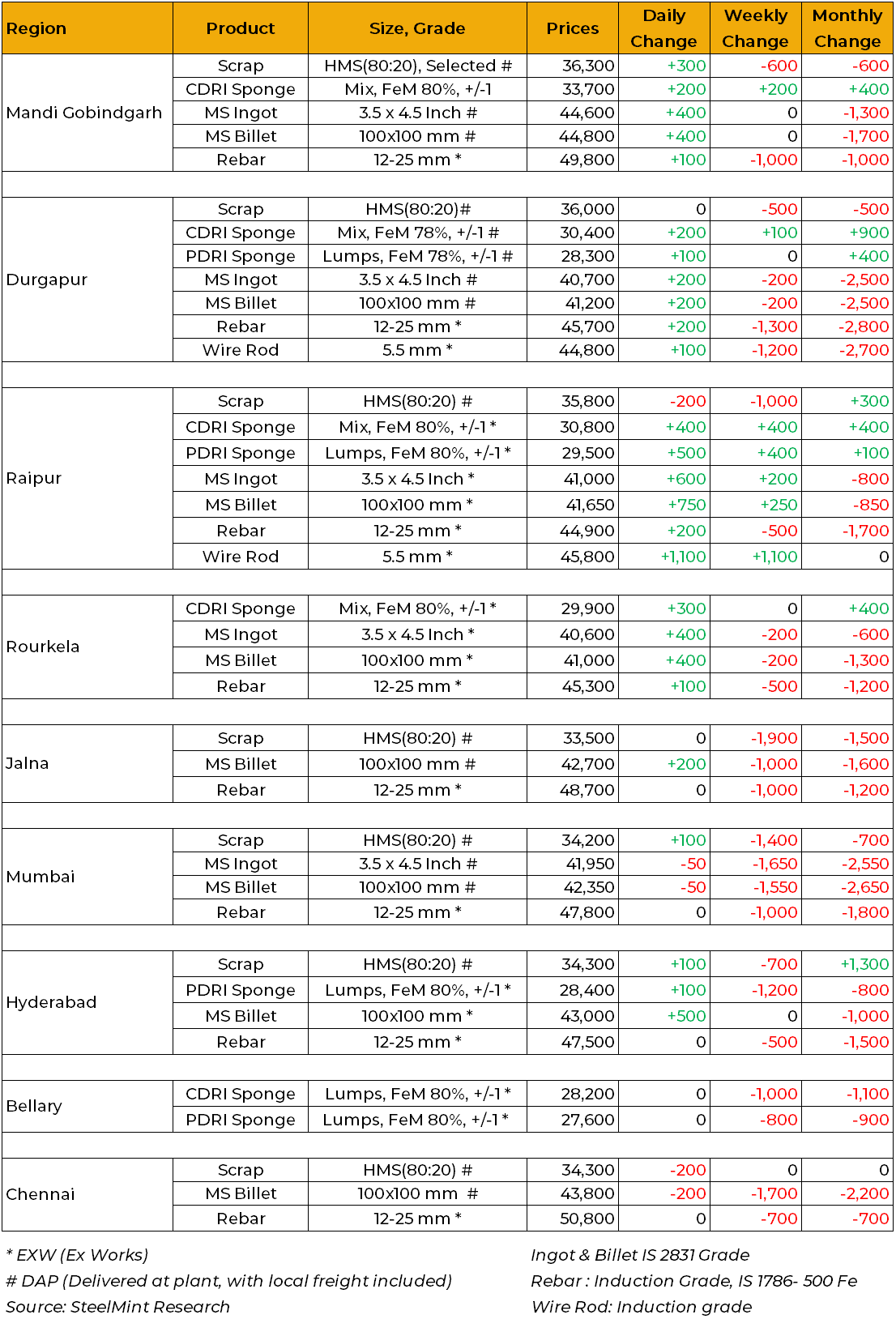