Indian silico manganese prices fell by around INR 500/t in the domestic market, as per SteelMint reports.

Imported scrap trade in Bangladesh remained limited this week as mills had booked around 4-5 bulk cargoes from the US last week at average price levels of $535-540/tonne (t) CFR Chittagong.

Bangladeshi buyers are interested in booking US-origin cargo as Japanese cargo remains out of reach due to disparity in freight rates, said a reliable source. Fresh offers for US-origin bulk cargo are at $535-540/t levels, largely firm w-o-w.

Meanwhile, the Bangladesh market is likely to remain closed due to stricter lockdown this week as a precautionary step by the government, owing to a sharp increase in the numbers of Covid cases in the past few weeks.

“From 1 July, it is a complete lockdown in Bangladesh. But industries and factories will be allowed to run. Limited bookings in containers are heard despite high steel prices and continuous rain in Bangladesh. Steel mills are procuring for the monsoon season,” said a prominent scrap dealer based in Bangladesh.

Container scrap offers up marginally: Containerised scrap offers inched up by $2-3/t this week. Buyers continued to book scrap containers in small quantities, to restock for the monsoon season.

Domestic rebar offers steady: Domestic rebar offers in Bangladesh remained unchanged so far but monsoons and lockdowns have slowed down sales quite a bit, sources said. However, major mills kept their offers unchanged against last week at BDT 70,000-72,000/t exw-Chittagong and those out of Dhaka-based mills were heard at around BDT 66,000-69,000/t exw.

The Indian pellet export market has gained some momentum after remaining silent for nearly two weeks. A couple of export deals, for 55,000 t each, were concluded by an eastern India-based pellet producer for Jul’21 and Aug shipments. SteelMint’s pellet export index (Fe 64%, 3% Al, FoB east coast) has recorded a rise of around $6/t w-o-w and currently stands at $229/t.

Steel mills in northern China have reduced production at blast furnaces for the week to ensure clean air ahead of the centenary celebrations of the founding of the Chinese Communist Party.

Some mills in northern China’s Shanxi province as well as the cities of Tangshan and Handan in Hebei province, have been required by local governments to suspend production at all of their blast furnaces from 29 Jun to 1 Jul, according to market sources.

Construction steel demand in China has declined as well, as the authorities have issued a diktat that construction sites in some areas of Shanxiand Hebei provinces suspend activities over a three-day period in a bid to reduce dust pollution. Market participants expect sintering cuts to bolster demand for pellets and iron ore lumps in the near term. 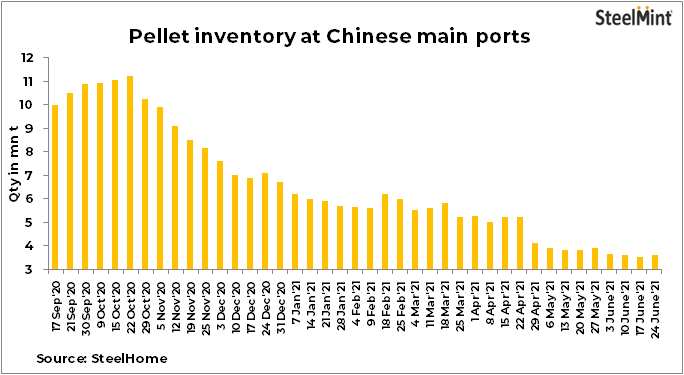 With the rising demand for South Africa’s coal and other minerals, the country’s government has been trying to resolve the structural challenges within its logistics system to weed out operational inefficiencies.

One of the first such steps taken by the South African government is the recent announcement of Transnet National Ports Authority (TNPA) as an independent subsidiary of Transnet SOC Limited.

The functional and legal separation of the two entities, which are currently operating divisions of the same company, will mean that revenues generated can be re-invested in port infrastructure, both for the replacement of old equipment and  upgrading and expansion of the ports. This will further result in increased efficiency, lower costs and new investment in port infrastructure.

TNPA is responsible for operating and controlling South Africa’s port system which consists of eight ports, including the major and well-known coal exporting harbour of Richards Bay Coal Terminal.

A sharp rise in domestic coal prices in China curtailed supplies due to safety inspections at mines and their reluctance to bring coal from Australia had forced Chinese traders to look for cheaper options abroad, thereby supporting South African coal prices.

On the supply side, issues related to disruptions in coal transportation, maintenance work and mishaps at rail lines, continued to hinder coal export volumes from South Africa and pushed up its thermal coal prices.

Eskom, which generates around 95% of the country’s power, continues to implement staged power cuts across the country in response to unplanned maintenance and breakdowns at its power stations.

Industry experts feel the consistent blackouts would negatively impact mining operations in South Africa as the intensity of the load shedding would force miners to halt or reduce operations.

In addition to this, many small and mid-sized South African coal miners are struggling with financial constraints post-pandemic, resulting in their subsequent closure or suspension of activities. In in such a scenario, only coal giants like Anglo American, Glencore and South32 can survive and govern market dynamics.

There is strong anticipation that Chinese demand for imported coal will reduce after 10 July, when mines inspections ease (after the 100th year celebration of the Chinese Communist Party is over), resulting in correction of imported coal prices.

Melting scrap prices witnessed variations on 30 Jun’21, as per SteelMint reports. Traders based in the western region reported that improvement in supplies resulted in prices sliding by up to INR 1,000/t. However, markets in the northern region witnessed price adjustments tracking movements in the semi-finished steel market. Traders remain cautious but feel that prices are expected to stay rangebound in the coming days.

Market participants in the central and southern regions informed SteelMint that a few rebar transactions, around 2,000 t in all, have been concluded from Raipur to Chennai on reasonable costing, with freight charges at INR 3,000-3,100/t. The current rebar trade reference price is at INR 43,600/t, exw-Raipur and INR 48,300/t, exw-Chennai. So, the landed cost is reasonable enough at around INR 1,800-2,000/t, excluding freight charges which may witness a slight correction in the Chennai market, as per trader sources.

Coal sales via the auction route provide subsidiaries of Coal India Ltd (CIL) an opportunity to garner additional revenue and liquidate any excess stock in hand. However, the case of Central Coalfields (CCL) tells a different narrative.

Unlike the other subsidiaries of CIL, CCL had commenced the new fiscal with reduced inventory of 10.56 million tonnes (mn t) against 13.3 mn t recorded in the previous fiscal. Besides, healthier coal demand helped inventory levels to liquidate faster which further came down to 6.37 mn t at the end of May ’21.

Eventually, the company decided to stay away from offering coal in the auctions for the first two months of FY ’22. In contrast, bulk volumes of 21.7 mn t of coal had been put up for sale via the auction route in the corresponding period of the previous fiscal.

It was only in Jun ’21, sales resumed with spot auctions to cater to the coal requirement of the customers. In fact, it was the first spot auction held by the company after a gap of three months.

In the latest round of auctions, the company offered a total of 1,376,500 tonnes (t) of coal via the spot auction on 7 and 18 Jun ’21, of which 48% of the material was booked.
Notably, this was the highest allocation against the offered volume seen in monthly spot auctions since Apr ’20.

Unlike its counterpart, Bharat Coking Coal Ltd (BCCL), CCL had kept 10% as the upper cap for fixing the reserve price, which helped the company to record higher sales in the auctions. 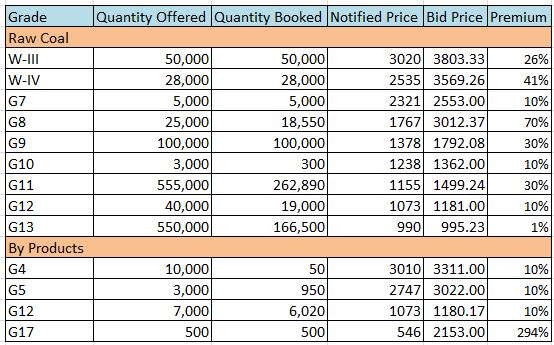 The entire 68,000 t of coking coal, across grades, was sold in the auctions which were offered at a comparatively lower reserve price than that of BCCL’s. Also, the non-coking coal grades were sold at a high premium over the notified price.

Moreover, the company also managed to fetch competitive prices for the coal by-products. Interestingly, reject coal from Rajrappa colliery garnered the highest premium of 294% among the various lots being offered for sale.

In order to further bolster auction sales, CCL came out with two more auctions during the month. In the first, a total of 555,000 t of coal was put up for sale via an exclusive auction on 28 Jun ’21. Following this, the first phase of the special spot auction was initiated wherein 1,722,500 t was offered on 29 Jun ’21.