Demand for low-grade iron ore continues to wilt owing to the rainy season and falling steel margins in China. Some traders in China are expecting sintering cuts to continue in the next month too, which is expected to further weaken demand for low-grade ore.

“There are hardly any bids from China. A few buying inquiries were heard at lower than $115/t, CFR levels,” highlighted a trader.

Logistical constraints and demurrage charges due to quarantine regulations for Indian cargoes at Chinese ports have added to the cost for Indian exporters, sources informed SteelMint.

However, unconfirmed deals by an Indian trader were heard concluded a few days back for two shipments of low-grade fines (Fe 57%) at $120/t, CFR China. But these deals did not qualify for calculation of the index, according to SteelMint methodology.

Iron ore stocks at Chinese ports decline further- Iron ore inventory at major Chinese ports decreased by around 0.64 mn t to 123.95 mn t this week compared with 124.6 mn t a week before, as per data maintained by SteelHome. 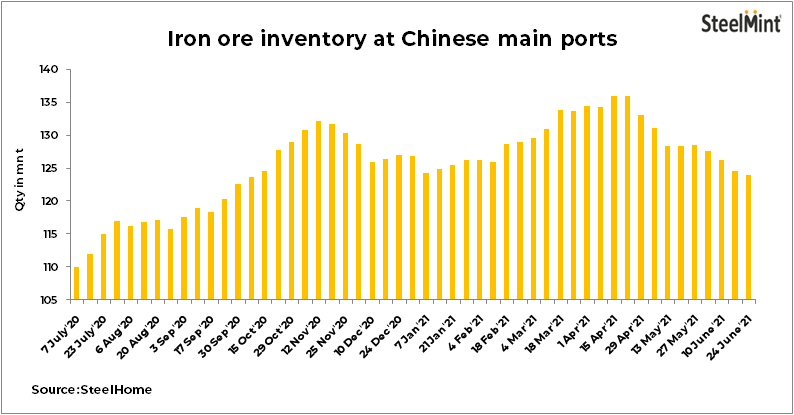 NMDC receives good response in iron ore e-auction – NMDC conducted an e-auction on 23 June’21 for 105,000 t of iron ore slimes (Fe 57/58%) from its Bacheli mines in Chhattisgarh. According to sources, the entire quantity received bids at INR 3,020/t (basic, excluding royalty, DMF and NMET) against the set base price of INR 2,800/t.